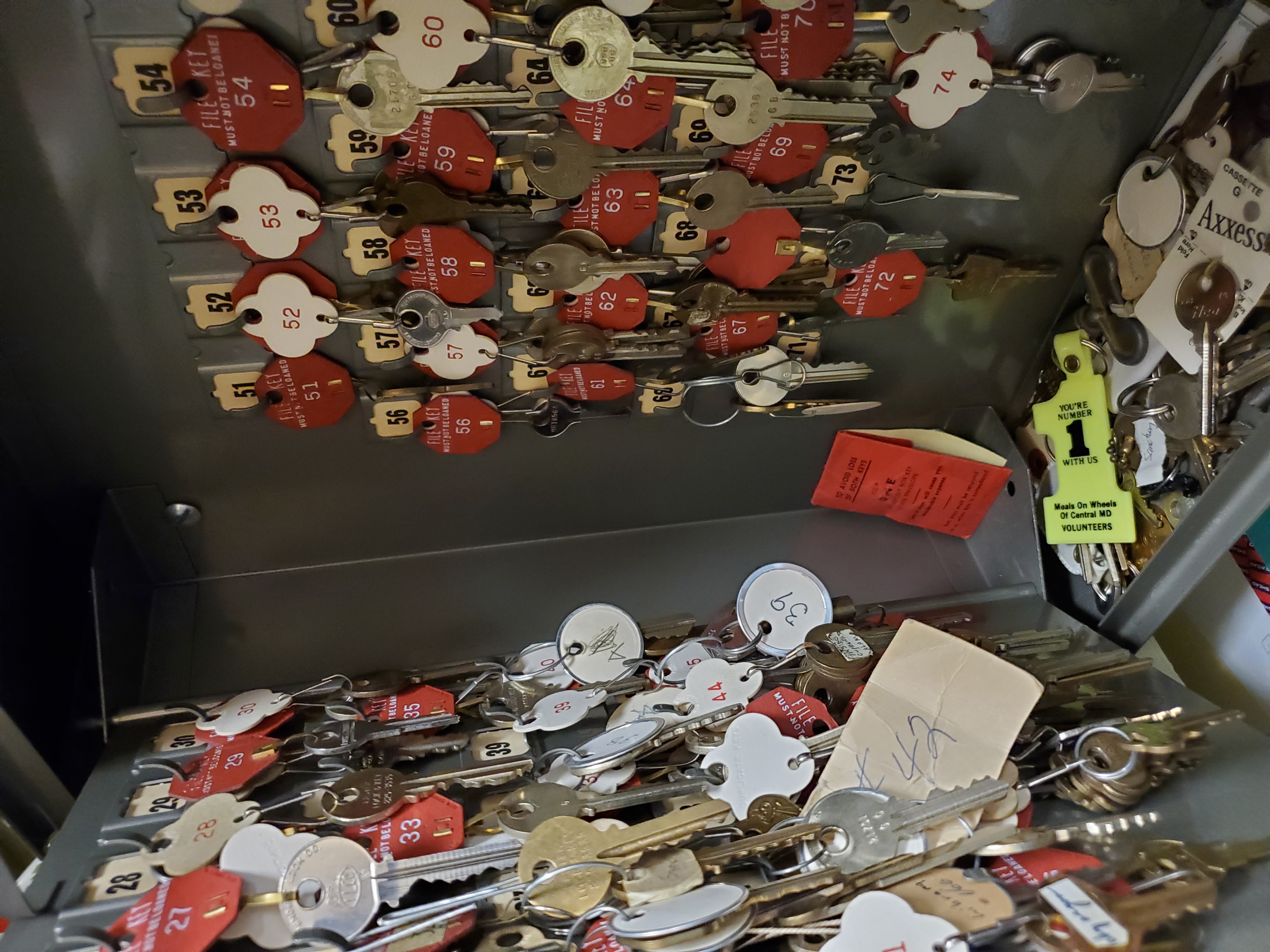 Keys to the Kin-dom

The last church I served had a sexton named Kandi.  She was often the first person to greet you if you came in the back door, and she loved to ham it up for visitors.  “Welcome to First Presbyterian Church,” she’d say, “a home in the heart of the city.”  She was the longest serving member of staff by a long shot, having worked there for almost 20 years.  Kandi knew the building inside and out, like the back of her hand – and if you needed to find something, you only had to ask.  She wore black Chuck Taylor All-Stars and usually some kind of Alabama paraphernalia, and you could always hear her coming – because of her keys!  Kandi had every key to every door in the church on a big round keychain she kept attached to her belt, and every step would jangle.  Somehow, whenever a door needed to be opened, she would be able to find the right key … most of the time.  Still, there were plenty of unmarked, unclaimed, anonymous mystery keys – cups of them on her desk, a handful in mine, a box in our administrator’s office.  Keychains full.

It wasn’t a surprise, then, when I arrived at Faith and Diane handed me an enormous set of keys.  It felt right!  Churches have a lot of doors, a lot of locks!  We need a lot of keys!  But even then, I was not prepared for all of these, or these.  “We have a labelled keybox,” Mike Shirey said… oh my.  My favorite part is the layer of unlabeled keys on the bottom.  There’s a handful of unmarked keys in my new desk, and a large number of mystery keys on the keychain – big keys and tiny ones, brass and silver, some shiny, others worn, some labelled, others… I separated the few I thought I’d need and stashed the others, not ready to jingle down the hallway trying all the keys in each lock I come to.  I’ll figure them all out eventually!

These keys tell a story.  They tell of a church that is deeply loved, and cared for by people who want to protect it, keep the sacred space safe for we who gather here.  They also tell us a little something about those who’ve gone before…and the different iterations of community that have worshipped together in Faith.

But to me, these keys also remind me about how empty the building feels this morning, when it should be bustling with all of you lovely people.  Smelling like coffee and fresh flowers and candlewax!  These keys remind me how much we have invested in our physical space: how much time, energy, and resources we put into our church buildings – and how unusual this time is that we cannot safely gather here.  It’s a place you all have worked so hard to make beautiful, and keep secure.  It’s church.  And yet, it’s locked up tight.  The pandemic has shifted our understanding of so much – how and where we work, how we learn, how we connect with friends and family, how we grieve, and also how we worship.  It’s enough to make me wonder, who are we, as individuals and as a church, when we cannot gather?

The gospels often deal with the question of identity – who was Jesus?  Who were those who followed him?  How was he the anointed one, and who came before him to make him so?  What difference does it make for us, for we who want to follow him now?  Our passage this morning is a prime example:

When Jesus asks his disciples, “Who do people say that I am?” They say, a prophet, reincarnated – John the Baptist. Elijah, Jeremiah.  They get part of it, part of who he is… he did come to teach and to transform and to call for justice.  But that isn’t all.  “who do you say that I am?”  he asks.  And only Peter gets it right.  Peter!  We should all take some comfort in this.  Peter was far from perfect.  The last time we saw him, he was so burdened by doubt, he sank into the sea.  And we know where Peter’s story leads, to denial, and fear, and abandonment.  Yet somehow, Peter gets this right!  There’s hope for us yet.  Peter calls Jesus the Messiah, the son of the Living God, and Jesus rewards him by saying, Peter, You are a Rock and on you I will build my church.

This is the first of only two references to church in all of the gospels.  The word is ekklesia, and may be more accurately translated as “assembly” – those who have been assembled or called by God into community.  And it is always a good reminder for me, as a professional Christian, to note that Jesus does not say – on you, Peter, I will build my church and worship will be on Sunday mornings around 11 o’clock, and the sermon will be no more than 20 minutes, and the pews will be wooden, and the music will be played on an organ and it will be spectacular.  None of that.  Jesus was an itinerant preacher; he built a movement of people who literally followed him from place to place.  Church, of course, came after.  And before it was parapets and pews and pianos, it was people.

The pandemic has truly hit home what we probably knew all along, what we affirmed with our wise young ones this morning – That church is not the building.  Church is the people, it’s you and me, Mike and Mercy and Melvin and Maddie and Marilyn and everyone else here too.  The community of the faithful, we who walk together, seeking to follow Christ and love one another.  Seeking justice.  Building peace.  Honoring God.

Jesus says to Peter, “I will give you the keys of the kingdom of heaven, and whatever you bind on earth will be bound in heaven, and whatever you loose on earth will be loosed in heaven.”  I know Jesus didn’t hand Peter a keyring like this one when he promised him the keys to the kingdom of heaven.  (don’t you wish he had, though?). It’s an apt metaphor: keys do lead to freedom… the freedom to come and go as you please, to open any door and close it again.  Keys can make you safe and secure… the feeling of checking to make sure the front door is locked before heading to bed for the night.  Keys can also liberate.  The feeling of your parents’ car keys in your hand as you head out the door, to meet friends, or even just to drive, windows open, wind in your hair, music blaring.  Freedom!  The keys to your very own apartment.  The feeling of turning the key in the lock of a business you built, and opening the door for the very first time.  Such possibility!

Of course, sometimes keys mean freedom, sometimes they don’t.  As easily as keys can set us free, and they can also shut us in.  Anyone who has been locked up or visited a prison can remember the sound the soul crushing clang and buzz of a gate being open or shut – the scrape of a metal key in a lock.

Keys aren’t so liberating if you’re the one who is locked in or out.  And the keys to my first apartment felt different than the keys to the first home I owned… since the housekeys came with a list of payments going out thirty years into the future.  Freedom, but with a cost.

The keys to the kingdom?  What did he mean?

Eric Barreto points out that when Jesus asks, “who do you say that I am?” he not only looking for a confession of faith.[2]  He’s also seeking to shape the community that will follow in particular ways.  Who Christ is forms who they are, and hopefully will inform what they do.  So when he offers the keys to the kingdom and the power to bind and to free, he is calling those who will follow him to continue his work: to heal and to cast out demons, and to share the gracious and liberating love of God.  The assembly of God’s people will bind up the world’s death dealing powers by the power of love in Christ, forgiving and freeing people from the burdens they bear.

And again and again, it happens!  Words of forgiveness and grace at the font unlock the burden of guilt and free us to live as whole, loved, forgiven people week after week.  Across the country, the church is at work to liberate and set free: In a presbytery in Idaho last year, churches pooled their resources to buy and forgive more than $1 million of crushing medical debt in their state.[3]  In St. Louis, those who attended GA two years ago gave almost $50,000 to pay bail and release folks from the local jail.  Through addiction and recovery programs, by advocating for refugees and asylum seekers, by proclaiming God’s life-giving love for all and embodying that love around an ever-expanding table – the people of God are working for liberation.

Everywhere we look, there is another person bound up by the death-dealing powers of the world.  Mass incarceration.  Grief.  Debt.  Fear.  Poverty.  Shame.  Addiction.  So much that needs unlocking.  It’s a good thing we have a lot of keys.

[1] Ada-Maria Isasi-Diaz is a Cuban-American theologian who coined the term, “the kin-dom of God.”  As a feminist and Latina, she rejected the oppressive hierarchy of a kingdom, and instead painted a vision of the family of God – the kin-dom – where we witness and are agents of God’s liberating work in and through our love for one another.