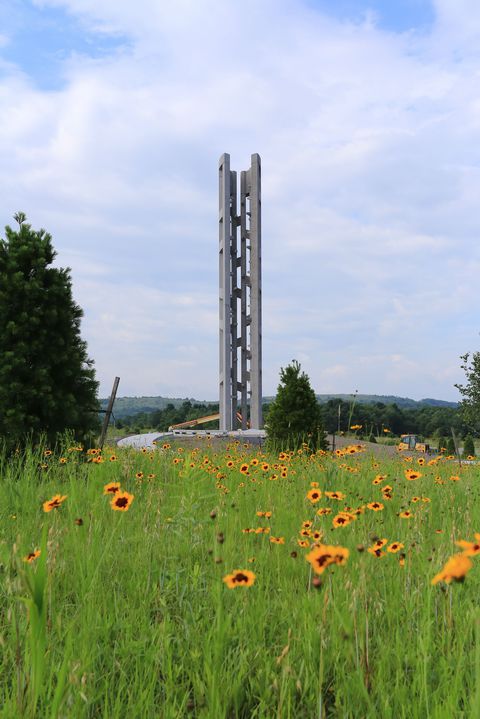 The image on the front of the bulletin, if you printed it out, is a depiction of today’s parable, which involves an ungrateful servant grabbing another man by the neck to demand payment of a debt.  The parable is about grace and forgiveness in the kingdom of God.  “How often should we forgive someone who has wronged us?” Peter asks, “Seven times?”  thinking, I’m sure, he’s being generous.  “Seventy times seven,” Jesus replies.  Seventy times seven… then he tells the parable to illustrate.  It’s an extreme story, one that was meant to provoke its hearers to deeper gratitude and willingness to forgive.  But I didn’t want the visual for worship to be such a violent image, so instead I’m using an image that I found to be beautiful, though it’s an image that might evoke violence of a different kind.  It’s the Tower of Voices, the memorial to the passengers and crew of flight 93, that crashed into a field in Pennsylvania instead of into the US Capitol 19 years and two days ago on 9/11.

I’ve never been to see it.  Maybe you have – it’s close, I think, only a few hours away.  But it is beautiful, and haunting.  It’s a tower, 93 feet tall, made with 40 windchimes to represent the 40 people, ordinary, courageous passengers and crewmembers who died on that day, sacrificing themselves to thwart a larger attack.  It seems a long time ago, almost 20 years.  But I’m sure if you were old enough, you remember it like it was yesterday – where you were, and what you were doing on that sunny September morning.

The image of this memorial struck me and has stuck with me as I wrestled with the text this week – because to preach forgiveness of all things on this Sunday in September – almost twenty years after an event that so changed our nation and shaped our foreign policy, an event that led us into a war which we are still fighting, for which we are still seeking vengeance … to talk about forgiveness today, well, it’s complicated, isn’t it?

It is easy to say, we should forgive one another.  Forgiveness is a mark of the church.  It is a fruit of the Spirit.  It is the Christian thing to do.  But forgiveness is so very hard to put into practice – in our own lives, with our friends and families, and in the broader world.

So what is Jesus trying to say with this parable?  How are we to take it, here and now, in Pandemic-struck Baltimore in the year 2020?

First, it’s important to remember that this story is told as a continuation of the passage from last week.  Jesus is telling Peter and the other disciples how to resolve conflict in the church.

I have to guess Jesus offers forgiveness first because anger, and guilt, and estrangement feel so bad.  They make us sick, physically sick.  The queasy stomach, sleepless nights, and sweaty palms of a guilty conscience.  The ulcers and high blood pressure that come from anger and anxiety.  Sin hurts.  It hurts us, it hurts other people.  Broken hearts, clenched fists, the flush of shame, the flinch of disgust, explosion of fury, the pain of guilt.  These feelings hold us back, they weigh us down.  They can even make a person feel completely paralyzed.

Maybe Jesus forgives the paralyzed man before he heals him, because healing and forgiveness go hand-in-hand.  Forgiveness enables hurting people begin to heal.  And forgiveness is one of the gifts God offers to us, it’s so important to our identity as Reformed Christians we remember and claim it each Sunday – we are a forgiven people.  Forgiveness is one way that God overcomes estrangement and brings forth new relationship, new life.

There is a photo exhibit that hung for a time in the Hague in Switzerland.  It is called “Portraits of Reconciliation,” and it features photos of men and women who were both the perpetrators and the survivors of the Rwandan genocide.[1]  The photos are striking.  Straight faced Rwandans stand side by side, a hand casually touching a shoulder.  The comments wreck me.  Woman in a blue checkered blouse and flowered skirt stands with a man in a green striped shirt, both staring at the camera.  He burned her house, seeking to attack her and her family, but they escaped.  She says, “I used to hate him. When he came to my house and knelt down before me and asked for forgiveness, I was moved by his sincerity. Now, if I cry for help, he comes to rescue me. When I face any issue, I call him.”

The people in the photographs, Hutus and Tutsis, are part of a program that brings together small groups of survivors for many months of counseling.  The program culminates in the perpetrators asking forgiveness of those who they harmed.  The photographer observes, “forgiveness is a survival instinct.”  One man who granted forgiveness to his attacker says, “when someone is full of anger, he can lose his mind.  When I granted forgiveness, I feel my mind at rest.”

I cannot fathom what life must be like for these people, people who overcame the horrors of war to rebuild their lives and communities.  But forgiveness and reconciliation were not only possible, they were necessary for them to live side by side.  To begin to heal.

Jesus sees the faith of the friends of the paralyzed man and offers forgiveness and healing.  What does faith look like?  What does hope look like?

I believe faith looks like a social worker teaching reconciliation techniques to a woman whose children were killed in war.  And hope, like a house rebuilt by neighbors who are atoning for burning it down in the first place.  Faith that reconciliation is possible.  Hope that a new community will spring up out of the ashes of the old one.

“Forgiveness is not a single action, but a process. By forgiving those who harmed us, we do not pretend that what harm they caused did not happen, or that it did not hurt. We can see that chronic resentment stands in the way of love. The bitterness that arises from a long-held wrong, gone over and over, encases the heart, making it difficult for love to get through.”

The political philosopher, Hannah Arendt, once called forgiveness the only hope for history which otherwise turns in endless cycles of revenge.[3]

[2] Salzburg, Sharon, “Forgiveness can be bittersweet,” On Being Blog, August 17, 2015, https://onbeing.org/blog/forgiveness-can-be-bittersweet/