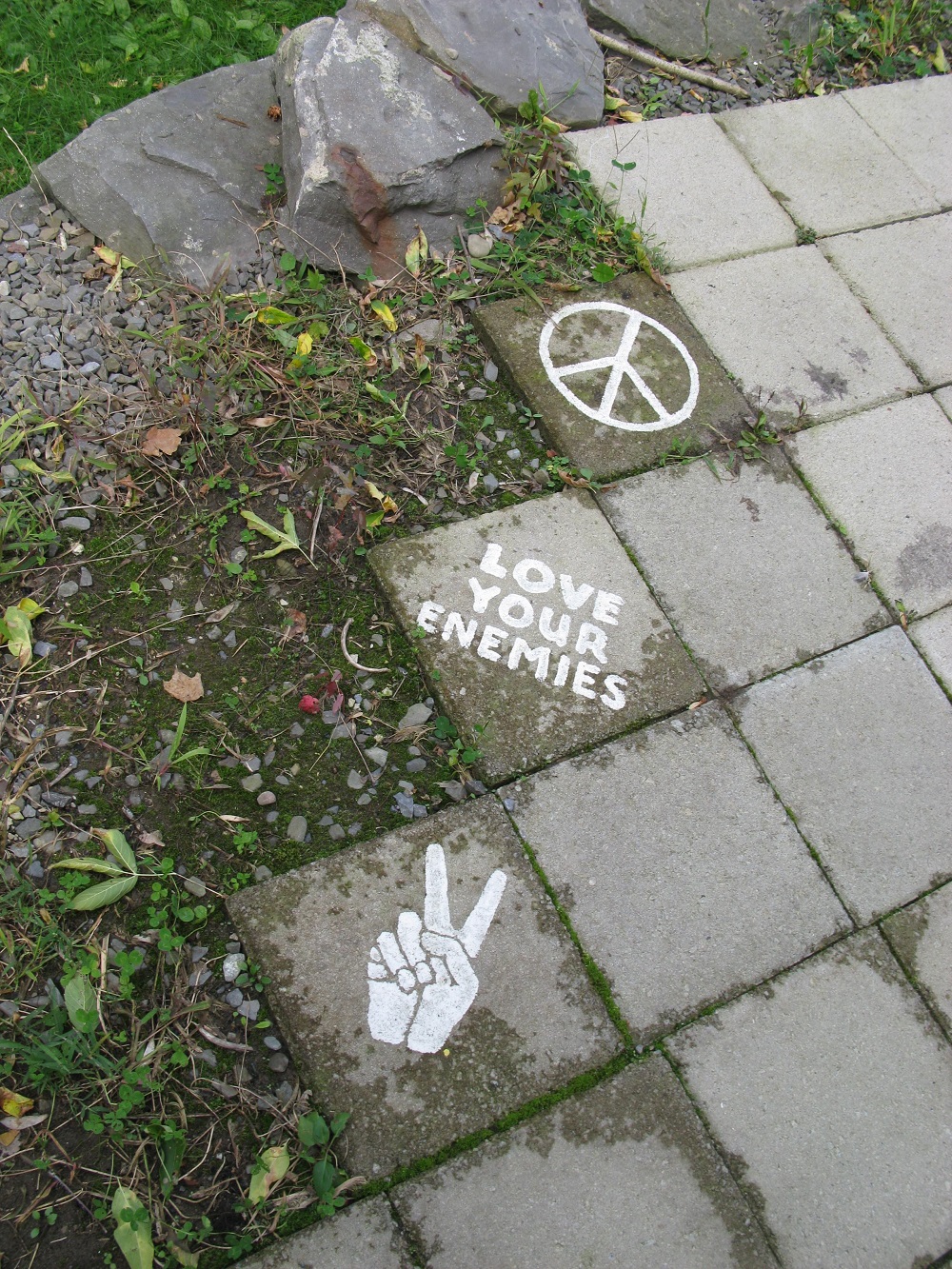 On Friday, February 11, there was a women’s lacrosse game in Clinton, South Carolina. The Howard University Bison were up against the Blue Hose of Presbyterian College – that’s H-o-s-e, for the blue stockings their sportsmen used to wear, a nod to PC’s Scottish heritage. This was the first game of Howard’s season and the women were excited – it was their first time to play under the leadership of their new coach.

Now you might not follow women’s collegiate lacrosse, but if you’re connected to Howard or to PC, you may have heard about this particular game – because in the hours before the teams took to the field…before the players put on their safety glasses and helmets, before the girls from Howard, butterflies in their stomachs, nervously slipped on their gloves, grabbed their sticks, and ran out onto the field hoping to impress their new coach…Before all that, as the young women from Howard got off their bus, loaded down with gear, bundled against the brisk February air, and walked across the short green turf, some other young people, presumably students at Presbyterian College, heckled them, shouting hateful, misogynistic, and racist slurs at them – taunting and provoking the athletes, young women they’d never even met.

Howard Athletic Director Kery Davis said, “I am deeply troubled that some of our student-athletes were subjected to slurs and abusive language before the women’s lacrosse match on Friday.” [1]  Yeah, me too.

The school is investigating the incident – which, hopefully, will lead to consequences for the perpetrators, and will include an examination of the campus culture that gave rise to this incident, a culture in which some students thought that such behavior was acceptable in the first place.

But this morning I keep thinking about those young women who had to take the field with racist taunts ringing in their ears. I’m sure they were angry. Did they feel unsafe? Vulnerable? Insulted? Like something precious had been violated, robbing them of the excitement and energy of the first game of the season? Maybe they took the field as an act of defiance – forget those hateful people, we’re going to play anyway.

I’m going to show you a few pictures and I want you to pay attention to how you feel when you see them. How does your body react?  \What do the images evoke in you, or remind you of?

These guys are the Greenville 4: Ezell Blair Jr., David Richmond, Franklin McCain and Joseph McNeil. They started the lunch counter sit-in protests at Woolworths lunch counter in Greenville, South Carolina in February of 1960. The day they began their protest, they tried to buy lunch, but the staff refused to serve them. The police were called, but didn’t take action because the students were just sitting there. As you know, the movement grew from there – here’s a picture of another sit in, that grew a bit more heated.

Here is one that’s more recent – and a little confusing, if you remember the story that swirled around this viral video – a teenager from Kentucky in a MAGA hat grins at a Native American elder at a protest in Washington, DC.

Here is Dr. William Barber, and Jesse Jackson being arrested during a poor people’s campaign protest in DC.

This is from the Dakota Access Pipeline protest at Standing Rock.

And here is an image of a Black Lives Matter protestor in Baton Rouge, Louisiana – in 2018.

Many (but not all) of these photos show civil disobedience, nonviolent direct action that seeks to create change by drawing attention to a problem, or to protest something that is wrong. These actions often bring people into conflict with others who oppose them, or with police who have been charged with to keep peace or protect property. These images are often what comes to mind for me when I hear Jesus call us to love and turn the other cheek.

The power of nonviolent resistance has transformed our world. It brought the British colonial empire to its knees in India. It ended Jim Crow segregation in the South. It stopped the pipeline. It’s drawn attention to police brutality and systemic racism.

Its power comes from collective action to form a movement – from many people acting as one to say together – there is a better way. But even movements come down to individual choices – one person committing to love instead of hate. One person and then another, and another choosing to work for restoration instead of seeking retribution. One person, in the face of violence, in the grip of fear or the red flash of anger, standing firm, sitting calmly, breathing peace, and turning the other cheek.

Our passage this morning may be Jesus’ most famous teaching. It may be one of his hardest teachings, too. So hard, many find it impossible. Love your enemies, do good to those who hate you…turn the other cheek…Do unto others as you would have them do unto you.

This passage is the continuation of the blessings and woes we heard last week, the sermon on the plain from the Gospel of Luke. Christ is teaching his disciples, and many more who would like to be – a big crowd of folks who’ve gathered seeking healing, and power.

The path of discipleship is not an easy one. Discipleship led Christ into conflict with the authorities, to Jerusalem and Golgotha, to crucifixion and death. With this teaching, I believe Jesus is preparing his followers to navigate the difficult road ahead, where they will encounter conflict, opposition, even hatred. But not only that. He’s helping us find our way into heaven, here and now – the reign of God present in the world around us. He’s teaching us how to liberate ourselves from the burdens of hate, bile and bitterness. Let it go, he says. Give freely to others without expecting anything in return. Forgive, as you have been forgiven. Love, as you have been loved – as God has given to you, forgiven you, and loved you without expecting anything in return. This is radical reciprocity, rooted in and stemming not from other people but from the goodness and mercy and love of God.

You know, the Golden Rule is found in every major world religion, in some form or another. And so there is wisdom we can draw from other religions to help us put Christ’s call to love and forgiveness into action. Buddhist scholars Robert Thurman and Sharon Salzburg wrote a book called Love your Enemy. In conversation with Krista Tippett of NPR’s On Being, they explain that loving your enemy isn’t the weak choice. It’s not choosing to be a doormat or pushover. Loving your enemies is a way to show powerful compassion for yourself. In Krista’s words, loving your enemies “is actually the most rational and pragmatic move, an antidote to a consuming culture of anger that is not a way most of us want to live.”[2] It takes so much energy, so much negative energy to be angry! It makes us feel terrible. Sure, anger, and hatred can motivate us, they can drive us to take action. But at what cost? Anger and hatred allow others to control how we feel – they can eat us up inside, send our thoughts racing in the same harmful loops, recounting the same litany of failures over and over again. That’s no way to live.

In living with the text this week, I realized that so often I think of this call in a big picture way, envisioning THE ENEMY out there – a Big “E” enemy, the looming faceless other: Russia amassing troops on the border of Ukraine, or the white supremacist nationalists who stormed the US Capitol last year. But the enemy we confront far more often is smaller, closer, more intimate than that. A small “e” enemy – the neighbor that annoys, the sibling who disappoints, the friend who borrows and doesn’t repay. This enemy is sometimes even within us – my own shortcomings, my impatience and anger with my children, my husband, those I know and love best. Finding a way to show compassion – for ourselves, and for others despite our many faults – is a pathway to healing, wholeness, and reconciliation. If Christ is to be believed, it’s how we find our way back to God.

In that conversation with Krista Tippett, Thurman observes that Jesus only had four years to teach before he was killed, whereas the Buddha had 46 years after his enlightenment, which means he had a lot more time to help his students find methodologies to adopt and practice his teachings! Buddhism offers two ways to practice this. One way we can cultivate love of our enemies big and small is through mindfulness – a Buddhist would do this through meditation practice – to build an awareness and presence of mind to disrupt patterns of thinking and waves of emotion. To be aware of our bodies, how we are feeling and to recognize that our emotions pass. Just because our hearts beat faster, our faces flush, and our bodies tense with the heat of anger doesn’t mean we have to let it dictate our actions. We can notice it, and change the channel, let it go.

Another way we can cultivate love of our enemies is through a specific kind of meditation called Loving-kindness practice. I actually did this as part of a psychological study when I was in seminary at Boston University. It’s a practice where you take a few minutes each day to think of someone who irks you. Notice how thinking of that person makes you feel. And then actively try to disrupt that feeling, and to not jump to loving them immediately, but at least to feel neutrally toward them. Then, as time goes on, move toward loving them – which is to say, to wish for them to be happy. And notice how that makes you feel, what comes up in you when you try to do that. Over time, your ability to re-route your anger, and your capacity for love will grow. And that is the path to healing. The path to forgiveness, the path to wholeness. The path, ultimately, that will save us all.

I charge you to try one of these practices this week. Maybe just commit to being a bit more present. Or maybe you can try to cultivate love toward yourself, toward a small-e enemy. Maybe you can practice loving-kindness toward someone who is a big-E Enemy; someone who has harmed you or threatened you in some way. See if it loosens something inside of you, opens up a space for love. I believe Christ knew that the only way to change everything was to first transform ourselves. So that when it comes time to hit the field, we can step out with courage, and compassion, and play with joy no matter what they throw at us. May it be so.