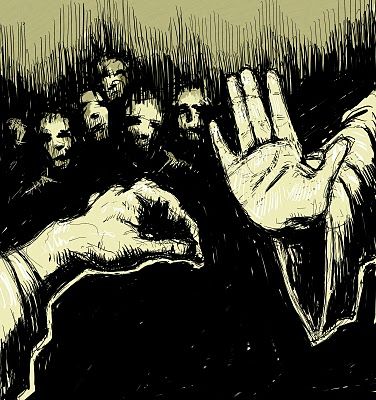 The Church of the Outstretched Hand

So, who cares? In our contemporary culture in which anything goes on Sunday and Sunday is simply a day like every other day, who cares about Jesus’ debate over what is the best way of keeping Sabbath? Who cares?

However, those of us of a certain age remember when nothing was open on Sundays, no sports were played on Sundays; families had Sunday dinners on Sundays. If we didn’t actually experience Sunday as different day, my guess is that we remember our grandparents talking about blue laws, and how, in some places, there was no dancing or card playing or anything on Sunday.

Be that as it may, I am not really sure the story about Jesus and his disciples eating grain and healing a man with a withered hand is about keeping Sabbath. Scholars suggest that there are some problems with this passage and that may explain why, until now, it hasn’t been in any of our schedule of readings. We can point out that it is pretty unlikely the Pharisees would have been out in a grain field on the Sabbath. We can also point out that if you were really hungry, eating that grain wouldn’t have been considered a violation of the Sabbath. Healing the man with the withered hand was not work, Jesus doesn’t even touch him, and therefore not an infraction of the rules. We can point out that Jesus, most of the time, was a defender of Sabbath law. In fact, our interpretation of this story and others as about how the Pharisees were out to get Jesus, eventually leading to his death, have contributed to, at least, a distorted view of the Pharisees and, at most, a dangerously anti-Jewish depiction of the Pharisees.

I propose, then, that we think of this passage from Luke, which, by the way, is also included in Matthew and Mark’s gospel, not so much as a run in between Jesus and the Pharisees about how to observe the Sabbath leading us to consider how we observe the Sabbath. I suggest we consider what Jesus says to us about the whole point of religious community. Instead of who cares about the Sabbath, maybe we should be asking who cares about the church, this bunch of people who just happen to get together on Sundays. Who cares…about the church?

After all, everywhere we look, there are those who tell us how obsolete the church is. Our numbers are dwindling. Our voice is fractured, split up as it is over hotly debated issues. Our voice is rarely heard as authoritative or of consequence. No less than the columnist David Brooks suggests that one of the reasons for the moral vacuum in our country these days is that the voice of clergy is no longer heard in the public square. Churches fall all over themselves trying to be relevant, doing away with old hymns, showing videos, praise bands, worshipping in warehouses or in bars, (now that is an idea we maybe should look more closely at). All the while, I fear churches are missing the point.

Jesus is walking with his disciples on the Sabbath. They are walking through a grain field and the disciples start eating the grain they pick from the stalks. I cannot picture this scene without remembering visiting the farm belonging to one of my mother’s friends. I was a child and the farmer invited me to go out early in the morning to help milk the cows. I thought it was magical. I remember filling the buckets with grain to feed the cows and tasting it as I did. It was – well – rather dry and rather oaty and very crunchy. I can imagine that disciples were hungry so they picked off those grains and ate them, tasteless as they must have been.

There was a remarkable story in the paper this week about the death of a survivor of a secret World War II mission. It seems Harold Hayes, who was only 21 at the time, was one of 13 male medics and 13 female nurses who were to have been air-dropped into Italy as the Allied forces were moving into that country to oust Hitler’s army.

A wicked storm blew their plane off course. Eventually, the plane crashed in a rural marsh in Albania. At times, the Americans were given shelter and food by sympathetic Albanians. However, at other times they were unable to find food and they existed by making tea by boiling straw and by eating berries. Miraculously, all of the medics and the nurses survived. We can imagine, then, how life-giving those grains of wheat might have been.

On another Sabbath day, Jesus goes to the synagogue where he teaches. In the synagogue that day was man with a withered hand. To be precise, his right hand was withered which probably meant that he could not work. It also meant that he was unable to fully participate in worship as he would have been ritually unclean. Jesus asks him to come forward. The man stands up and comes forward. Jesus asks, is it lawful to do good or to do harm on the Sabbath, to save life or to destroy it? Jesus pauses, and looks around at the congregation. Then he tells the man to stretch out his hand. When the man does so, his hand is healed. Now he can fully participate in the worship life of his congregation. Now he can be a productive member of his community.

If we accept the possibility that this story comes from the early church which many argue, it comes from a time when the followers of Jesus were suspected of not being really Jewish. I wonder if that isn’t an argument we have today. What does it mean to really be the church? What does it mean to be really Christian? I was in a conversation just this week with clergy who talked about being under fire for not reciting the Apostles Creed every Sunday or not saying the Lord’s Prayer every Sunday or not singing the Doxology or the Gloria Patri every Sunday. Really? In this time when the church is regarded as irrelevant, are we arguing about not singing the Doxology?

Maybe, just maybe, we as the church should be asking ourselves: Are we destroying life? Or are we giving life?

A fellow pastor tells the story about his church. Their roof had a leak. The church finally fixed the leak with the help of an “architect, a structural engineer, three bids, ten meetings, four subcontractors and a small fortune”. (Matt Fitzgerald, Daily Devotional, Jan.22, ’17) However, even though the leaks stopped, the damage from them remained. Every Sunday, as the pastor looks out at his congregation, he can still see the stains which prompt him to ask himself about the priorities of being church. William Kitt was a homeless man. He’d been homeless for more than 30 years. He was addicted. He was plagued by violent nightmares. He slept in boxes.

On Christmas Eve of 2003 he went to worship in the church with the stains. Sitting under the arched wooden ceiling, something happened to him. ‘I looked around the church and saw the faces of the congregation, from the kids up to the adults. I wanted what they had.’” Soon after that, Mr. Kitt moved into transitional housing where he has a sun-lit apartment. Today he is sober and he makes a living selling his oil paintings. The transformation of Mr. Kitt happened, I would argue, in church…in a church that was life-giving.

My prayer is that Faith Church will be known as the church of the withered hand because, let’s face, aren’t we all people with withered hands? Don’t we all have one infirmity or another? Are any of us truly worthy of the love God has shown us? Aren’t we all refugees of some sort? Aren’t we all afflicted with some sort of suffering? A life-giving church offers healing and acceptance.

I think it is worth noting that the man with the withered hand only has to reach out his hand, to offer who he is, in order to be healed. May we be a place where people are not afraid to offer who they are.

In a recent article entitled “Want millennials Back in the pews? Stop trying to make church ‘cool’” (Rachel Held Evans), the author argues that what brought her back to the church “after years of running away, wasn’t lattes or skinny jeans; it was the sacraments. Baptism, confession, Communion, preaching the Word, anointing the sick – you know, those strange rituals and traditions Christians have been practicing for the past 2,000 years. The sacraments are what make the church relevant, no matter the culture or era.” She doesn’t say it but I think she would agree that the sacraments are important because they are life-giving. Yesterday we thanked God for one of God’s saints, Edith Elliot. Today we will lay our hands on a new leader for our church. These occasions are life-giving. Of course, our sacraments are most important when we offer them to everybody – the man with the withered hand, the left out, the poor, the gay and the lesbian, those of a different race, the immigrant, those otherwise left out in our culture.

I offer an incomplete list of ways that our church can be life-giving. Perhaps you will think of additional ways we can give life. However, today I cannot, leave out this final thought. My Biblical scholar consultant has written a book about Sabbath as resistance in which he argues that “Worship that does not lead to neighborly compassion and justice cannot be faithful worship of YHWH. The offer is a phony Sabbath!” (Walter Brueggemann, Sabbath as Resistance: Saying No to the Culture of Now )

Have you ever thought about that? That what we do here on Sunday morning is resistance – resistance to a dominant culture of deathly priorities?

On Friday afternoon, Shabbat, a group of suburban synagogue members met at O’Hare International Airport, waiting to meet one of the last Syrian refugee families to be accepted into the US. They waited to welcome, in the warmest way they could, people our country has said it no longer wants. Some of the Jews in the welcome party were the children and grandchildren of refugees – people who had come to this country during the Holocaust in order to find life. The Syrians were arriving on Shabbat. They were also arriving on the International Holocaust Remembrance Day. These Jews were observing the Sabbath by resisting our country’s attitude toward refugees.