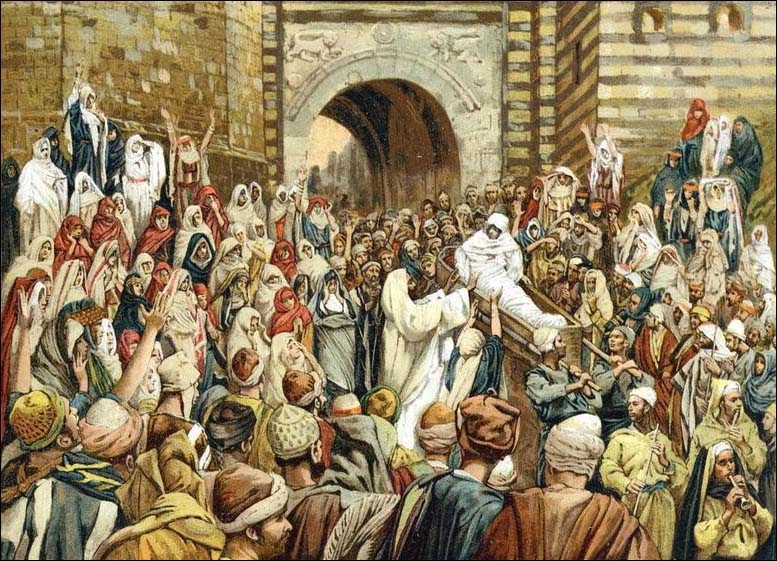 Many of you know that I have been on an administrative commission for a church in Bel Air. “Administrative commission” is Presbyterian speak for a group of folks who go to be with a church that is split up. Consequently, I find myself driving out to Bel Air, sometimes at odd times; most of the time at night. Now, as you know, we’ve got Faith people who live out that way and who drive in to church all the time. But I am a city girl. You get me out there on those dark roads at night and I feel disoriented and lonely. I mean, Bel Air feels like another state! I am coming to the idea that my little excursions out into the county are teaching me things.

This morning I invite you to think, first of all, about the geography of the two stories we heard this morning. Let’s imagine we are among those who have been walking with Jesus. Our numbers have grown. We’ve pretty much stayed close to home. Jesus is from Galilee, right? His disciples are from Galilee. Galilee is, at the time of Jesus, considered something of a backwater place. It lacks the culture and the commerce and sophistication of the area around Jerusalem, for example.

So far, we’ve been in familiar surroundings, more or less around the Sea of Galilee. We know this place, this land, these people.

When Jesus goes to Capernaum, right there as it is on the lake, it is “our people” he speaks to. We know this place.

However, this time, when we get to Capernaum, after Jesus does his thing teaching, we are met by some Jewish elders who ask him to come to the house of a centurion that is a general in the Roman army who commands a hundred men. The centurion’s slave is gravely ill and he wants Jesus to heal him. We are in a familiar place, but this is not a familiar encounter – a Roman soldier wants Jesus to come to his house? The elders persuade Jesus by telling him that, even though the Romans are hated and despised, even though the Romans are our oppressors, Jesus should go to his house because the guy is a good guy. He loves our people. He even built our synagogue for us.

Jesus, and we, because by this point, where Jesus goes, we go, we start for the centurion’s house. When we are most of the way there, we are met by some of the centurion’s friends who tell Jesus that the centurion feels unworthy to have Jesus come all that way. If he just says the word, his beloved servant will be healed. It is as if the centurion recognizes Jesus’ authority. If you just say the word, he says, healing will happen. Jesus turns around to us and tells us, we who have been following him all along, we who have left our homes and families in order to go all over kingdom come, Jesus turns to us and says, “I tell you, not even in Israel have I found such faith”.

It is stunning. All we can hear is the gentle lapping of the Sea of Galilee in the background; it is such a familiar sound to us. We are in our home turf. We are with our friends; people we know. And Jesus is telling us that this foreigner, this wicked Roman has more faith than we do? All because he tells Jesus that all he has to do is issue a command and his servant will be healed. And who is this servant anyway? Whoever heard of a Roman commander caring that much for an Israelite slave – so much so that he built him a synagogue, so much so that he goes to a Galilean healer man on behalf of his slave? Makes you wonder, doesn’t it? Maybe their relationship is more than meets the eye. Maybe they are more than master and slave. Just thinking. And, this Roman has more faith than we do? Just thinking. The slave, by the way, he is healed.

Soon after this encounter, we leave the familiar and head some twenty or so miles south to a place called Nain…kind of like going from Baltimore to Bel Air. Now, we are out of our comfort zone. Nain is a fair piece from Capernaum. We get to this town, and there is a huge procession coming out of the gates of the town. It is quickly apparent that it is a funeral procession. It seems a widow has lost her only son. It is a heart-wrenching scene – a mother completely bereft. She has nothing. Nothing. There is no future for her. And, she is inconsolable. As the crowd slowly moves toward the rock-hewn tombs on the outskirts of town, Jesus sees this widow. No one else really sees her. After all, it is a common enough sight, a crying mother. But Jesus sees her. Not only that, but Jesus feels for her. He has compassion for her. When we say “compassion”, we are actually using a word that means coming from our gut, wrenching our guts, our innermost selves.

Jesus tells the widow not to cry, at which point the crowd stops moving, and Jesus reaches out and touches the coffin. “Young man”, he says, “I say to you, rise!” The son sits up in that coffin and starts talking! Jesus takes the young man and gives him to his mother. The crowd, as you can imagine, is awe-struck. We are both scared and amazed. What kind of power does this man have that he can heal from a distance and raise a kid from the dead?

Here is what we learn when we walk with Jesus: He takes us out of our comfort zone. He tells us that just because we are baptized, good church folk who are in church on Sunday morning, we don’t necessarily have the faith that someone we may despise has. Oh, my – there are all those people outside this church that are living…faithfully…we’ve got to open our doors to them. Not only that. We have to be open to those who disagree with us; those who define faith differently than us.

William Willimon tells a story about a church that was dying and trying to decide what to do with their church building. They got a new pastor that convinced the church that what they should was just keep the church open to anyone who wanted to come in. And, so they did. They kept the church open all the time and never locked the doors and soon there were regular homeless people who slept there at night and there were people who hung out there during the day because it was warm. However, the insurance people soon warned the church that they could not keep their insurance and not lock the doors. So, the congregation regretfully locked the doors to the church. However, they put the keys under a rock where all could see it. The rock had big bold letters: “KEY”. Don’t you know that church came to life again because it opened itself to the others in its neighborhood!

Second, if we walk with Jesus, we learn something about trusting our gut. In both the story of the centurion and the story of the widow and her son, Jesus had compassion for the plight of otherwise ignored people. I fear one of the things I am seeing in our country today is the inability to feel what another is feeling. We keep hearing that this past election was all about “my” pocketbook, “my” security, “my” job, “my” doctor. Have we lost the ability to feel compassion for the other – that ability to feel from our innermost selves, not what I am feeling, but what the other is feeling – whether it is the steelworker in Ohio or the Syrian child with no place to go? When Jesus tells that story about the folk who pass by the fellow lying in the ditch is he talking about us – the Levite and the priest – the good guys who go to church? And, who is it that has compassion for the robbed and beaten man? A foreigner? A Samaritan? Might as well have been a Roman army officer. If we say we are going to walk with Jesus, if we say that, yes, there is a balm in Gilead, then we are going to have to tell the love of Jesus…and, that is going to take guts!