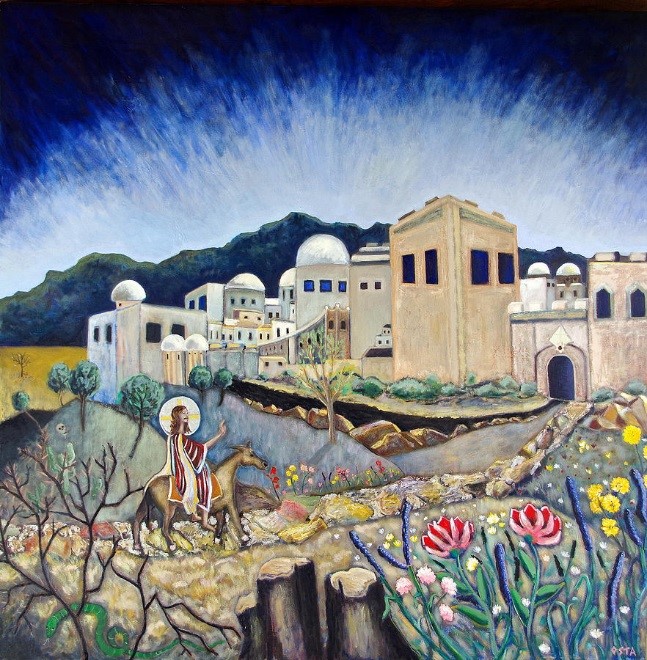 When the Ramparts Start to Crumble

Archaeologists in recent times have uncovered huge stones and rubble near the Western Wall in Jerusalem. The stones are all that is left of what was the glorious temple in Jerusalem. The temple was, by many accounts, one of the most impressive pieces of architecture in the world and all that remains of it are some massive stones and broken pieces of columns.

In 70 CE, the Roman army brutally crushed a Jewish uprising. In the process, they virtually obliterated Jerusalem even though it is reported that some Roman officers were reluctant to execute Titus’ order to destroy the temple because it wouldn’t “be right to destroy a holy building renowned as one of the greatest products of human endeavor.” (P.186 Excavating Jesus – Borg and Reed)

Large stones, pieces of rubble, are all that is left of the temple of Jerusalem.

When Jesus entered Jerusalem, riding on a donkey, he entered a city that was both the holiest of holy and the most dangerous place in his part of the world. The temple was in Jerusalem making it the hope of every Jewish pilgrim. Jerusalem was the “Golden”, as the old hymn puts it:

with milk and honey blest,

beneath your contemplation Sink heart and voice oppressed.

What joys await us there,

What bliss beyond compare. (Jerusalem the Golden; Bernard Cluny)

However, Jerusalem was also the center of everything that was wrong with a country occupied by foreign armies. It reeked of corruption and the beautiful temple was not immune from that corruption. Jerusalem was especially dangerous at festival times when its population multiplied with pilgrims, when religious affections so easily became passionate and the risk of unrest was acute.

When Jesus neared the city, he wept over it, saying “If you, even you, had only recognized on this day the things that make for peace! But now they are hidden from your eyes. Indeed, the enemies will set up ramparts around you and surround you, and hem you in on every side. They will crush you to the ground, you and your children within you, and they will not leave within you one stone upon another, because you did not recognize the time of your visitation from God.” (19:41-44)

In 70 CE, the Romans did exactly what Jesus predicted and not one stone was left upon another. The ramparts had completely crumbled.

My question for us this morning is: What do we do when the ramparts crumble? The fact is, sometimes our sanctuaries are destroyed and we are left without safety or shelter. What do we do then?

In last Sunday’s paper there was a story about the people of Niger who have been driven from their homes by Boco Haran. They’ve found refuge out in the open along a highway where daily existence is precarious. There is virtually no shelter, not enough water, food is scarce and there is no way to make a living. None-the-less, they endure. The ramparts of their lives have been destroyed.

In another part of the world, ISIS is systematically destroying whole cities and the Syrian government is gassing its own people. What do we do when the ramparts start to crumble?

But we need not look very far for evidence of crumbling ramparts. We know from our own experience the reality of lives upended. The walls of our lives break apart by divorce, by death, by the sudden diagnosis of a life-threatening illness, by being uprooted and having to make life over again in a strange place. In those times when life rips down our beautifully constructed walls, do we not feel defenseless and exposed and laid bare? Do we not say to ourselves, Oh that we knew the things that make for peace?

What do we do when the ramparts start to crumble?

First of all, we learn that God is not confined to buildings, either physical ones or the ones we make for ourselves. Stephen preaches in the book of Acts: “Yet the Most High does not dwell in houses made with human hands, as the prophet says,

Heaven is my throne,

and the earth is my footstool.

What kind of house will you build for me, says the Lord,

or what is the place of my rest?

Did not my hand make all these things?

And, Paul, in his letter to the church in Corinth, wrote: “For we know that if the earthly tent we live in is destroyed, we have a building from God, a house not made with hands, eternal in the heavens.” (2 Corinthians 4:16-5:1) Our God is not confined to buildings and it is hubris to think that our buildings are indispensable to the existence of God.

Second, when the ramparts are destroyed, we improvise. In the absence of the temple, Judaism focused on education and eventually centered their religious life in local synagogues. Rabbinic Judaism was born and Judaism turned toward the Torah rather than Temple worship and political sovereignty.

The followers of Christ who fled Jerusalem because it was going to be destroyed discovered that there was a ministry to others, non-Jews. Christianity grew in the midst of the rubble and displacement.

I like to tell the story of the church in Charleston South Carolina that was destroyed by Hurricane Hugo. The church decided that rather than worship in somebody else’s building, they would construct a big tent on their now vacant property. While the church was in the tent, before they could rebuild, the congregation multiplied.

After Jesus’ death, his followers learned to do for themselves and adapt to their new situation. They thought they could go back to their old lives and fish. But the risen Jesus told them to get off their duff and “Go therefore and make disciples of all nations, baptizing them in the name of the Father and of the Son and of the Holy Spirit….” (Matt. 28:19)

Finally, when our earthy tents are destroyed, do we not come to see that, we are sanctuaries: “Lord make me a sanctuary, pure and holy, tried and true. With thanksgiving, I’ll be a sanctuary for you.” (Lord, Prepare Me)

The singer, LeAnn Rimes has named her most recent album, Remnants. When asked about the title of the album, Ms Rimes referred to what it feels like to fall apart and the value of that experience. She said that if you can give into the grieving you feel, you discover that there is beauty in it. When you crumble, she says, you are able to identify the pieces, like those rocks buried under what was the temple. You are able to identify that remnant that is indestructibly you. And, with those pieces, you can be made into something new. (Ayann Johnson Watkins, Christian Century, March 29, ’17)