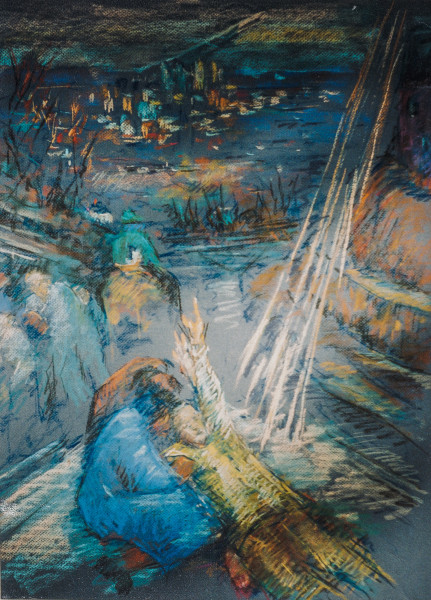 Bless This Mess: Saul of Tarsus

Next Sunday will be one year since I started my ministry here at Faith Church, thanks be to God!  You do not know this, but I feel like it is a small miracle that in all this time, I have resisted using the TV show The Wire as an example in a sermon here in Baltimore.  I feel like I may need a prize of some sort.  A full year!  Such a great show, but maybe a little too close to home here.  The Wire, as I’m sure you know, aired on HBO and was written by David Simon, who started out as a journalist with the Baltimore Sun.[1]  It grew out of a book he wrote after a year of shadowing the Baltimore City Police Department. One of my favorite characters in the Wire was not detective McNulty, not kingpin Stringer Bell… it was Bubbles.[2]  Bubbles was a heroin addict, convincingly played by Andre Royo, struggling toward recovery throughout the show.  We meet him initially because he’s working as an informant for the police, helping the detectives of Major Crimes keep track of dealers.  He’s a likeable guy, funny, always scheming, looking for his next fix.  The Wire ran for six seasons, and in that time Bubbles is often clearly trying to do better, but time and again he makes a mess of things, mistake after mistake – Simon calls the addicts he writes about “at war with themselves.” The question for viewers is: can he change?  Can he overcome his addiction, and become the good guy we see he can be?  This is, of course, a key question for anyone struggling with addiction, for anyone who loves someone who is.  Can people change?

This is, of course, Ananias’s question, too.  Ananias is just an ordinary disciple in Damascus, minding his own business, when God wakes him up in the middle of the night with a vision too crazy to believe – God shows Ananias that he must go lay hands on a man named Saul so that Saul can regain his sight.  Ananias thinks – “Saul of Tarsus?  That guy?  That guy hates Christians!  You want me to go find HIM?  God, you’ve gotta be kidding me.  Why would I want to do something like that?  There’s no WAY he can change.  What a mess.”

I understand Ananias’s hesitation.  I mean, this is Saul, who we know as Paul.  He was a zealot.  In Paul’s own words, he was “…a member of the people of Israel, of the tribe of Benjamin, a Hebrew born of Hebrews, as to the law, a Pharisee; as to zeal, a persecutor of the church; as to righteousness under the law, blameless.”[3]

Blameless, that is, according to Jewish law.  But if you were a Christ believer, watch out.  When Saul first appears earlier in Acts, he is tracking down Christians and turning them over to the authorities to be put in prison, searching house after house after house – the people he caught were as good as dead.  When a mob went to stone the apostle Stephen, Saul was the guy who stood by and watched their coats.  That guy was not cool.  A hater, if there ever was one.

So what Ananias wants to know, is can people change?  Can they?  Can you, can I?  Can Bubbles?  Can Saul?

You may know that the earliest writings in the New Testament are not the Gospels.  Mark, Matthew, Luke, and John – they were writing at least 40-50 years after the death of Jesus.  The earliest writings in the New Testament are the letters of the apostle Paul – the letters Paul wrote to the house churches all over the Mediterranean, churches that he mostly helped to start.  The bulk of the New Testament comes from Paul.  He was likely a contemporary of Jesus’s, maybe a few years younger.  And he was devoting his life to targeting and stopping Jesus’s disciples.  So what happened to turn this hater, this persecutor of the church, Saul of Tarsus, into Paul the apostle who ignited the early church and spread the good news everywhere he went?

This happened.  An mysterious encounter on the road to Damascus left Paul blinded: a flash of light, a voice from heaven, and he is struck down in the road.  For three days he cannot see, cannot eat, cannot do anything except pray and think about his life and all the people he’s hurt and the mistakes he’s made… all the evil he has done to the saints in Jerusalem. Then Ananias comes and lays hands on Saul, healing his blindness and helping him see clearly that Jesus was the messiah he’d been waiting for, the most full revelation of God on earth.

I wish that every time I was on the wrong path, or at a crossroads facing a difficult decision, there would be a blinding flash of light from heaven and a booming disembodied voice would offer guidance.  A message from God doesn’t have to be complicated… it could be a holy post-it note, a phone call in the middle of the night – I’d even settle for an email.  Wouldn’t you?  I wish it could be that easy.  That clear.  But for most of us, that’s not how it works.

For most of us, discernment, choice, and change happen gradually, quietly.  When we’re on the wrong path, or at a crossroads, we figure out what to do by listening to the quiet voice inside, by talking with those we know and trust, and hearing the wisdom of our community – all of us who are trying together to love God and do better.  And change is a daily choice, the building up of muscle memory over time to create new pathways in our brains to override the old ones.  Change takes time.  It’s not something we can easily do on our own.

What would have happened to Saul if Ananias had refused to go?  Had said, “no way, God, that guy’s a hater, he can stay blind for all I care.”  Ananias’s help, his willingness to trust God and go to someone who had been his enemy, allowed Saul to see again.  Ananias’s trust in God jump started Saul’s witness to Jesus as Lord in Damascus and beyond.  It wasn’t just the two of them.  Ananias helped connect Saul to a community that would give direction and meaning to his life.  As New Testament scholar Peter Berger said, “Saul became Paul in a moment of religious ecstasy, but Paul could remain Paul only in the context of Christian community.”[4]

We all need community to be able to sustain change.  It’s one reason why groups like CrossFit and Weight Watchers and AA are popular – they create communities of support and accountability when people are trying to make real changes in their lives.  The same could be said for church – or should be.

Earlier this week, Karen Meyers and I went to a BUILD meeting – the first large, in-person gathering for BUILD – that’s Baltimoreans United in Leadership Development – since the start of the pandemic.  The meeting was held outside of a school, in a field in southwest Baltimore.  Karen, God bless her, helped me find the place.  And I was worn out when I got there, but I was so glad I went – because folks from all over the city were there, from North and South and East and West, Black, white, and Latino.  All sharing what we are most concerned about in our communities.  As the sun set and the full moon rose, one of the pastor leaders of the organization, George Hopkins of SoWeBo community church, asked, what do we believe is possible for our city?  Can Baltimore change?  Can we make that happen?

Can a city change?

BUILD’s belief, obviously, is that our city can change, and it has, and it will again, through the power of people organized to call on and stand up to our elected officials and demand it.  In the next few months, leaders said, the city will receive more than $600 million dollars in Covid relief and infrastructure funding.  The state is getting more than $3.5 billion.  A lot of people are wondering, how will that money be spent?  Will it go to our neighborhoods that are struggling, to our schools that don’t have safe water to drink or working heat and a/c?  Will it help create a city that’s safe, with affordable housing, and functioning transit, and meaningful jobs?  Will it support the kids in Woodbourne-McCabe whose families are facing eviction? What do you think?  Where would you like to see it go?

BUILD called the churches and synagogues and community groups that were there to listen more deeply, more intentionally to our people, and to talk with our neighbors- to hear what keeps them up at night, what they care enough about to take action, and where they’d like to see that money invested.  So I wonder… what keeps you up at night?  What do YOU care enough about to do something about?  Where would YOU like to see that money invested?  Let’s talk about it, and listen to each other, and see what our shared interests are.  I’d like to invite you to stay after worship one Sunday in August, August 29, to have lunch together, to talk, and to listen.  Because I believe that people can change.  The core of our faith is that by God’s grace, we find redemption, transformation, resurrection – new life.  And I believe that this city can change.  And I think you probably do, too.

Thinking back to Bubbles… he was a deeply flawed character, who witnessed again and again the tragic consequences of addiction and life on the street.  After the death of his closest friend, he renewed his efforts to overcome his addiction, joining NA and getting a sponsor.  His sponsor encouraged him to find a way to give back, to find something outside of himself to care about, so Bubbles starts volunteering at a Catholic Worker House soup kitchen – styled on Viva House here in Baltimore.  And somehow, with the support of that community, he manages to stay sober.

I’m guessing there are a lot of people who’ve found similar refuge there.  Who, with the support of a community, discover that change is possible.  Change for themselves.  Change for others.  Maybe you’ve experienced change, too.  Maybe we will.  Maybe our city will, too.  Redemption.  Renewal.  Resurrection – new life!  Thanks be to God.

[1] I drew from Wikipedia’s article on David Simon for this summary, https://en.wikipedia.org/wiki/David_Simon

[2] I refreshed my memory about this character from Wikipedia’s article about him, https://en.wikipedia.org/wiki/Bubbles_(The_Wire)