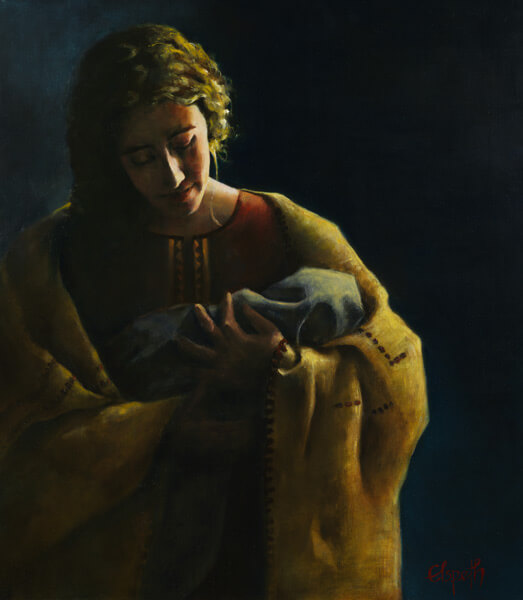 Bless This Mess: Shiphrah and Puah

I just learned something amazing that I need to tell you about.  I heard it on the Radiolab podcast, which I love, though I should have known it already.[1]  Have you ever wondered how a baby breathes before it is born?  Its little lungs are developing, it’s floating in the amniotic fluid, it clearly can’t breathe air – so how does it get oxygen?  Through its umbilical cord!  All the oxygen a growing fetus needs comes from its mother!  Blood oxygenated in its mother’s lungs, is pushed by its mother’s heart down into the placenta, and through the cord, into what will become the baby’s belly button!  There’s a large vein that runs from the belly button to the baby’s developing heart, and the vein carries the oxygenated blood from the mom there.  And in my heart, and in yours, the two sides are separated.  Right side, left side.  The right side of the heart gets all of the blue, depleted blood from the body and pushes it into our lungs, where it absorbs oxygen and drops off carbon dioxide, so we can breathe it out.  Then the red, oxygenated blood flows to the Left side of our hearts, where it’s pushed back out to the rest of our bodies, carrying oxygen to our brains, our arms, our legs, our toes.  And it goes like that, pulsing through our bodies for as long as we live.

But a developing baby’s heart is different.  Before a baby is born, there’s a little opening in their heart, a trap door between the left and right sides.  The oxygenated blood from the mom and the depleted blood from the baby’s body mix together, and get swooshed around the baby’s body.  Some goes back out through the vein and cord and placenta to the mom’s body, to her lungs, where she breathes out the carbon dioxide from not just her body but from her baby’s body, too.  And again and again.

Isn’t that amazing?  But if that’s how it works, how does a baby go from inside, out?  What happens when the baby is born, and moves from breathing through its umbilical cord to breathing on its own?  From its lungs developing in the warm sea of amniotic fluid, to taking in the bright, dry air?

The magic happens during labor, when the mom’s body is contracting and pushing and opening to prepare to give birth.  As the baby moves down the birth canal, the contractions squish and squeeze its body, smooshing and pushing the water out of its lungs.  And as soon as the baby is born, into the world, the shock of the cold air hits its skin, and causes the baby to gasp, to take a big breath in.  That first gasp, and the cries that follow it, start a chain of events in its body.  The lungs inflate.  The brain sends a signal to its heart, and the door slams shut, closing off the two sides of its heart, so that the rich oxygenated blood coming from the baby’s lungs gets pumped to the rest of its body, and the depleted blood gets pushed back to the lungs – just like that, within the first few seconds of being born.  The umbilical cord has already started to close up, the connection through the placenta closes off, and we, each one of us, has learned to breathe.  And we keep breathing, in and out, for the rest of our lives.

When both of my girls were born, I remember laughing with relief and amazement as they took their first breaths and immediately began to wail, with such tiny intensity, as only a newborn can wail.  Tiny, ferocious cries, shocked and furious at the bright, cold world.  So beautiful, so LOUD, so full of life!

I’ve often wondered about the midwives and doulas, the obs and nurses who get to see this miracle over and over again.  Does it change them to see life emerge again and again?  Do they become inured to it?  Is it always a miracle?

Surely the experience of attending many births inspires a profound respect for the sanctity of life. I have to guess that was what motivated Shiphrah and Puah to defy the order of the Pharoah.  Because rule of the Pharoah was absolute.  He who would order the mass murder of infants would not hesitate to sacrifice two women who disobeyed him.  But they defied him anyway.  I can imagine their hands, strong hands that had caught countless babies, gently guiding new life into the world, suddenly clenched into fists as they steeled their courage and got their stories straight.  They couldn’t kill the boy babies.  They wouldn’t.  They would have to take a deep breath and lie, that’s all there was to it.  They would clasp hands and face him together, stand up to him together.  Pharoah was just a man, after all.  He might not know how unlikely it was for a woman to give birth alone.

There’s some debate about who these women were.  Were they Egyptians charged with helping the enslaved Israelites give birth?  Were they Israelites themselves, trained as midwives for their community?  It’s hard to say.  But they were women, so their power was limited.  The risk was extreme.  And still, they dared to defy the most powerful man in the country.  They did what they could, using their hands and hearts to protect the vulnerable.  And look at the ripple effect: their courage inspired others, which ultimately saved Moses, who went on to save his people.

Last year, in the desperate weeks after George Floyd was killed, a friend shared a list outlining methods of nonviolent protest and persuasion[2].  If you’d asked me to name them, I could have come up with a few: boycotts, petitions, picket lines.  Sit-ins, public art, protest marches.  Blocking traffic. Prayer vigils.  I’m sure you could name others.  But this list – it was long.  Almost 200 items, everything from strikes and walk-outs to creating alternative trade systems.  There are countless nonviolent ways to resist the dehumanizing forces that seek to shape our world.  Countless ways to say NO to Pharoah.  And some say acts of political defiance have their roots in this story – in the resistance of Shiphrah and Puah, two women, two midwives, saying NO.  We will not do it.  We will not kill the boy babies.  Our hands were made to bring forth life, to guide babies into the world, to save, not to kill.  To carefully clean the vernix and blood from noses and mouths so babies can breathe freely, to swaddle their tiny bodies and keep them safe, and warm.  Our hands were made for life, not for death.

I have to guess that they were terrified to defy Pharoah in this way.  Surely their voices shook and their palms were sweaty as they stood in his throne room to say, it’s impossible – the Hebrew women give birth too soon, before we get there.  Surely the midwives were afraid.  But they did it anyway.

That is the definition of courage, isn’t it?  To be afraid, but to do it anyway?

Tomorrow marks the 52nd anniversary of the uprising at the Stonewall Inn[3], a gay bar in New York, that fateful night that sparked a revolution of LGBTQ rights and gave birth to gay pride.  Regular, humiliating raids on nightclubs in the late 60’s pushed the community over the edge. And so, for five nights in the Village, men, women, trans and nonbinary folk resisted the violence of billy clubs with a can-can kick line, refusing to hide who they were, refusing to back down.  Instead, they took a deep breath, and clasped hands together and proudly went out, into the streets.  And after years of organizing, and resisting discrimination again and again – six years and one day ago, the Supreme Court finally made it legal for two people who love each other to marry regardless of their gender.  And the fight continues for trans and non-binary folx.

Just over a year ago, George Floyd’s cries of “I can’t breathe” caused us to gasp with shock and desperation, to clench our fists and move out to the street, to resist state violence and advocate for change.  To say no to policies and practices that lead to death, to use our hands, our hearts, our voices to proclaim that Black Lives Matter, and to work together to reform how we keep our communities, our people safe.

So if the pressure these days feels like too much to bear…  if the news or your work or family is just pushing and squeezing and bearing down on you until you feel wrung out… or it causes you to gasp and cry out in shock.  Remember your heart was formed for this life by the shock of a world so cold it caused you to gasp.  Remember Shiphrah and Puah.  Remember that God gives us to each other, and calls us into community so that we can take a deep breath together and say, enough is enough.  Remember all the times people of courage and faith have held hands and joined together in the sacred struggle for justice in this world.  So that we might stand together and channel the courage of those midwives, to resist the hatred of Pharoah, to use our hands, and our hearts to change the world.