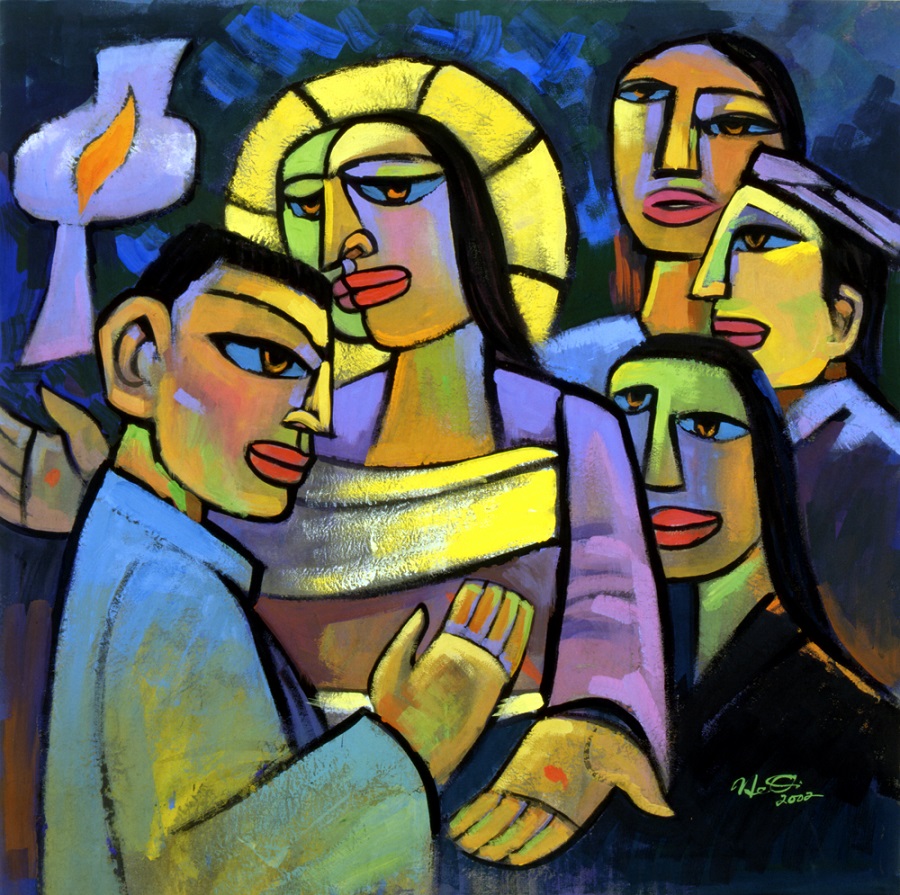 Well. Here we are. It is the Sunday after Easter. We are still waiting for Spring. It is a bit of a let down, isn’t it? After all, last Sunday the church was full, we had the sound of soaring brass, children filled the garden with their laughter as they hunted for eggs. Now we are back to reality. It is fifty years after Dr. King’s murder and we are still battling racism and war mongering. It is the Sunday after Easter and we are back to the time being. Like the poet wrote:

But for the time being, here we all are,

Back in the Aristotelian city

Of darning and the Eight-Fifteen, where Euclid’s geometry

And the kitchen table exists because I scrub it.

It seems to have shrunk during the holidays. The streets

Are much narrower than we remembered; we had forgotten

The office was as depressing as this. (Auden, For The Time Being).

At least we aren’t alone in our post-Easter malaise. I am thinking the disciples must have felt the same way. There they were holed up in a room with locked doors because they were afraid. John says they were afraid of the Jews but we know now that John had reason to write his version of things. He had an agenda. There was tension between Jews and Christ-followers when John wrote his gospel at the end of the first century. In the time since Jesus’ death, there was increasing friction between his followers and Jews. John wants tell a story that will bring people to faith in Jesus.  \He has an anti-Jewish bias which we need to hear for what it is when we read his gospel. \ The most important thing about this description is that the disciples were afraid. \ Perhaps they were afraid of what the Romans would do since Jesus’ body had gone missing. Perhaps they were afraid of being accused of having taken his body. Perhaps they were afraid of what the empty tomb meant. I am thinking the disciples could have been just like us: we don’t always know what to make of the resurrection. Things hadn’t turned out like they thought they would. They responded to the reports from the women who had been to the tomb with disbelief. It was an “idle tale” (Luke 24:11). They didn’t believe them. Perhaps they were expecting a different result. Perhaps they were disillusioned. The man they had expected to lead them into a triumph over Roman oppression had been brutally executed. It was over.

So. There they were – huddled together in a locked room because they were afraid. It is evening of Easter Day.

Suddenly Jesus is there. He stands among them and says “Peace be with you.” Then he shows them his wounds. The disciples jump up and rejoice…when they see his wounds. Jesus says again “Peace be with you.” Then he breathes on them. He tells them to receive the Holy Spirit. And, he tells them if they forgive someone they will be forgiven but if they do not forgive there will be no forgiveness.

The disciples had a secret room where they thought no one could find them.

I just read a mystery in which a murder takes place in a room in a small town church that no one knew about. It was a root cellar with a secret entrance that had been created during prohibition when liquor was smuggled and hid in the church. The mystery caused me to wonder if our church has a secret room some place; if our church has secrets I don’t know about. After all, the church I served in Brooklyn had a mysterious undercroft where runaway slaves were hid during the Civil War. We used to take our kids down there on Halloween, which they loved.

Don’t you remember as children wanting to have a secret room? My grandchildren have discovered the space underneath my basement stairs where they love to explore. What was your secret room?

In his book The Art of Pilgrimage, Phil Cousineau shares the story of a couple who bought an old farmhouse:

“It was a ‘warren of small rooms,’ and once they settled in and began to furnish their new home they realized that the lay of the house made little sense. ‘Peeling off some wallpaper, they found a door that they pried open to reveal a tiny room, sealed off and hidden, goodness knows why; they found no corpses nor stolen good.’ (The Painted Prayer Book, Jan Richardson Easter 2)

According to the author, every pilgrimage has a secret room. To discover that room, we must peel off the wall paper, knock on walls, jiggle the floorboards. We have to find our own secret room or we will never understand the hidden reasons why we left home for the pilgrimage in the first place.

The disciples had been on a pilgrimage. They left their homes and walked with this man they barely knew all around the country. They listened as he preached. They saw him heal people. They ate with him. They were afraid for him. They had been transformed from simple fishermen into those who had the power…to heal and to forgive in Jesus’ name. And, now they were in their secret room…afraid and confused and sad.

Somehow, Jesus gets in. Jesus breaks into even the most secret of our rooms. Once he is there, what does Jesus do? He offers us peace. He breathes his spirit on us and into us. He invites us to touch his wounds thereby touching our own. And he gives us permission to forgive.

My own personal journey is about to take a different turn and I do not know what it will be like. I do not know what to expect. I’ve had all sorts of advice. Someone just this week looked me straight in the eye and said, “Well I hope you have a plan!” Do I have a plan? Probably not in the way the inquirer thought I should. I mean it occurred to me as I mailed my taxes that I should figure out how my income tax report will change. Did Jesus have a plan? I am figuring the disciples didn’t have much of a plan or else they wouldn’t have been holed up in that secret room.

I think sometimes that Jesus showed up after the crucifixion precisely because the disciples didn’t have a plan and they were forgetting what Jesus told them should be the plan. They were paralyzed by grief and by wounds – both Jesus’ and theirs. Jesus shows up in order to get us to move on.

We know that we, too, need to move on in our pilgrimage. People like to tell us that as if it were so simple: Just move on. It seems to me that Jesus was ahead of his time. Psychologists tell us that in order to move on we first have to look at the wounds of our lives – honestly. And, don’t just look at them. Put your fingers in the holes – touch them. Own them. Secondly, forgive whatever needs to be forgiven – the one who made the wounds…ourselves, most especially ourselves.

In order to receive the peace that Jesus offers, deal with the wounds and forgive.

The poet, Ann Weems, wrote a book of poems called Psalms of Lament. Her son, Todd, died in a motorcycle accident the day after his 21st birthday and, as she put it, and “still I weep” (p.xv). As a way of coping with her wounds, touching her wounds you might say, Weems was encouraged to write her own version of those psalms the ancestors in our faith wrote to express anguish and sorrow and anger.

Weems concludes one of those psalms this way:

when you speak to me.

and the sky is alive

Your hand reaches out

and colors the world

My soul is a rainbow!

Isn’t that what happens in that locked room? Somehow God breaks and enters in. God’s hand reaches out and colors the world with a touch. And, all our sobbing bursts into song!