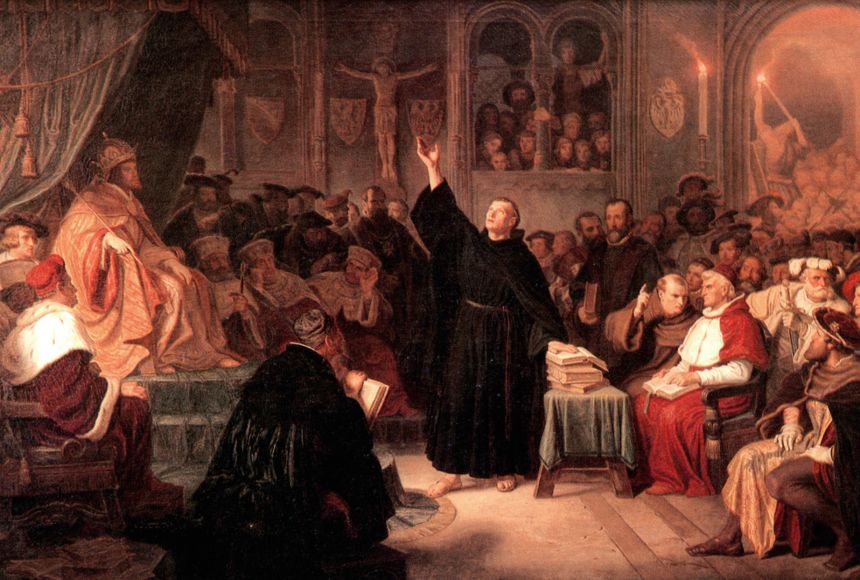 First, a history lesson!  Today is Reformation Sunday, when Protestant churches around the world celebrate and remember the men and women who challenged the Catholic church and eventually broke away from it, creating a new way of following Christ and honoring God in community.  If you’ve studied this, you’ll remember that the Reformation was ignited in 1517 when Martin Luther nailed his 95 theses to the door of Wittenberg Chapel in Germany.  He was protesting the sale of indulgences, amongst other excesses and injustices wrought by the church at that time.  One would think that those days are far behind us, and they are – we get on beautifully well with our neighbors at St. Matthew’s, but there are still a few cultural flashpoints on which we differ with the Catholic community at large – who can be ordained, and a woman’s right to choose chief among them.  Our Presbyterian practice has grown distinct from the others even in our Protestant family: the Lutherans, the Congregationalists, the Methodists, the Baptists and so on.  Still, we all trace our roots back to the nail in the door at Wittenberg, back to that furious cleric courageous enough to criticize the church.

Luther, Calvin, Zwingli, Knox, and the other reformers didn’t believe that people needed an intermediary between themselves and God.  Instead, they taught people to read and put Bibles into peoples’ hands, so for the first time, ordinary folks had the chance to see and interpret scripture for themselves.  Before this time, education was restricted to the clergy and aristocracy – but the Reformers saw the importance of literacy and learning for everyone, which led to greater access to education for poor people across Europe.  Part of what drove the reformation was the invention of the printing press –when people had access to Bibles printed in their native tongue and could read the Word for themselves, it changed them, opening their imagination to new ways of building faithful community, to be in relationship with God.

We still believe that Christ alone is Lord of the conscience – that we can determine what is right and wrong, discern God’s will for ourselves and our churches through prayer and reflection, discussion and debate.  We see this at all levels of the Presbyterian church, in the work of the session, the Presbytery, the General Assembly.  And we believe that we are the church reformed, always being reformed…. Thanks be to God!  That is, the reformation wasn’t a one-time event.  God is still at work: shaping, changing, pushing us to adapt to new challenges and circumstances.  We are a confessional church, which means that at critical moments in history, we stop and assess, to reaffirm what we believe about who God is, who we are, and what we are called to do.

Accordingly, we should remember that today is the 40th anniversary of the Belhar Confession: a statement against apartheid by the Dutch Reformed Mission Church in South Africa, calling the church to stand unified together against racist division and discrimination.  Belhar was written in 1982, and was adopted in 1986. Nelson Mandela was still in prison; this was 8 years before the end of apartheid and the first free, integrated elections there in 1994.  The confession was written not only because of the political and social horrors wrought by racist separation policies in their country, but because these divisions existed within and were perpetuated by the church, too.  So Allan Boesak and the other religious leaders had the courage to say that the church belongs not to humans but to God, and therefore “must stand where the Lord stands, namely against injustice and with the wronged;…[and] must witness against all the powerful and privileged who selfishly seek their own interests and thus control and harm others.”[1]  As you might imagine, this call to unity was not universally well-received.  One of the authors of the confession was jailed and tortured, and people denounced it as a communist document.  Still, the wheels were set in motion, and the change that many longed for was coming… in both the church and in the wider society.  And, within ten years, it did.

The Belhar confession was added to our own PCUSA book of Confessions in 2016.  It is worth remembering that it took more than twelve years of study and at least one failed attempt to include this statement and its powerful call to unity against racism in our book.  As the PCUSA’s history of the confession notes, “Apartheid is the human context for the Confession of Belhar, yet it is never mentioned in the confession. Rather, Belhar lifts up the heart of the Gospel as a bringer of hope for the human condition. Belhar presents a Christian view of racism, separation, and suffering by those who had experienced the realities of these evils.”[2] It was eventually included because leaders in our church here in the US hoped it might strengthen our common witness and work to build a more just church, and a more kind, loving, and just world.

So why remember this today?

In part, because it’s important to know our history.  But also because this letter to the early church in Thessalonica is problematic!  You heard, as I read it, the part that the lectionary leaves out: the promise that God will wreak vengeance on the church’s enemies; the threat that God will repay with affliction those who cause suffering.  The writer’s belief that suffering and persecution make us worthy of the kingdom of God!

The fledgling community to which Paul is writing WAS suffering persecution at that time in the declining Roman empire; Paul himself was imprisoned because of his efforts to spread the faith.  But that is not our context!  Looking around, we can see the problems that come from equating ourselves here in the US in the 21st century with that persecuted Christian minority – the justification of discrimination against women, LGBTQ people, people of color, other religions on the grounds of our religious beliefs.  The embrace of violence as a means to protect a particular community or belief system.  The flag of the crusaders flying over a riot on the steps of the US capitol.  A man with a hammer attacking the spouse of the Speaker of the House.  This kind of thinking leads down a dangerous road.

But Paul’s letter to the church in Thessalonica should not be dismissed outright. Paul affirms the love and peace of the community as signs of their faith and persistence despite the challenges they face.  Our love for one another and commitment to unity in the midst of struggle are gifts from God, who promises to give us grace sufficient to the work to which we are called!  This letter is a snapshot, a window into a time as the church was just beginning to discover what it looked like to seek to hold fast to faith in the midst of adversity.  It affirms that justice matters to God, that though God is merciful, our actions have consequences.  As Americans in the 21st Century, we would do well to remember that.

And also, there is room, space for us to change: just as Zaccheus was changed by his encounter with Jesus in the road – to atone for his wrongdoing, to become a person of great generosity.

In its exploration of the Belhar Confession, the PCUSA observes that “[Ours] is a faith and tradition that must be continuously liberated from its own failures and idolatries, but also a tradition with an enormous liberating potential.”[3]  That is, we don’t always get it right.  Luther was antisemitic.  Calvin’s Geneva was not a fun place to live – he was terribly harsh, and left no room for artistic expression or play-  he himself was sent away at one point for being too exacting.  We don’t have to look far back in the PCUSA’s history to find a reluctance to embrace integration, the leadership of women and LGBTQ people, and so on.  And so I am grateful that we are a church reformed and always being reformed.  That we have the capacity to change, and that this is in fact the work of the Spirit within us and through us!  I’m grateful for the promise that the Spirit continues to be at work, breaking open our hearts and our notions of what church looks like, or sounds like, or acts like – so that we can continue to become the beloved community God intends for us to be.  MAY IT BE SO!!!

[1] The Confession of Belhar, https://www.presbyterianmission.org/resource/belhar-confession/

[2] PCUSA History of the Confession of Belhar, https://www.pcusa.org/site_media/media/uploads/theologyandworship/pdfs/the_belhar_confession-rogers.pdf

[3] Smit, D.J., “The struggle against apartheid and its significance for Reformed faith today,” Reformed World (Volume 55/4, December 2005) pp. 366-367, quoted by Eunice McGarrahan, “A Study of the Belhar Confession and its Accompanying Letter,” Office of Theology and Worship, PCUSA, 1/28/2008.