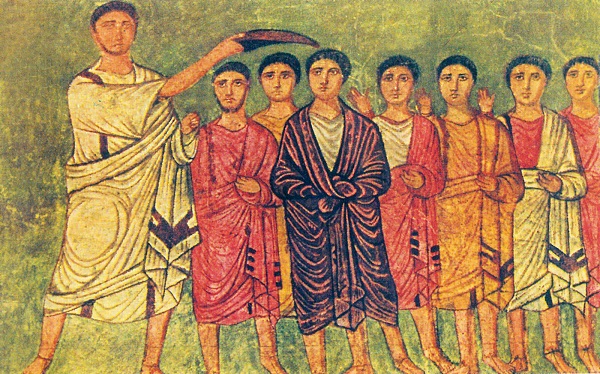 Like most of you I have a morning routine. I check my email first and then I check Facebook. I am not a particularly savvy Facebook user and some of the stuff on Facebook infuriates me.  None the less, I do find out things about my parishioners and friends. For example, I know what you are doing when you aren’t in church!

This morning we are going to check Facebook. The first post that we see is God’s! God has posted something on the prophet Samuel’s page: “How long are you going to grieve over Saul! I am going in a different direction. Get over it, Samuel!!!” If we look at previous posts, we will see that God’s communication with Samuel has been spotty. God has posted numerous messages about the perils of having a king. Kings tax you. Kings raise armies. Kings require that you do things you do not want to do. None the less, Israel wants a king. Israel wants to be like the other nations. So, eventually we see God’s post that Samuel should check out Saul’s Facebook page. When Samuel does, he sees a good looking young man but nothing special. On Saul’s page, we see a young man and his friend out on a small road seemingly nowhere. Saul has written: “Me and my good buddy out looking for Dad’s donkeys!” Samuel, for the life of him, couldn’t tell why God thought so much of this guy, at least from what he posted on Facebook! Saul seemed, in fact, so ordinary – nothing on his page suggested that he’d traveled anywhere beyond his small village. His biggest adventure was going to look for those donkeys! None the less, Samuel clicked “like” on the donkey posting and asked to be one of Saul’s friends. As a result, the two men – well, one man and one young man – eventually meet and Samuel is prepared. He has his bottle of oil. And just like that, with a dribble of oil, Samuel anoints (I know – not a very Facebook description) Saul king.

Samuel follows Saul closely. He reads about Saul’s numerous military exploits. He sees Saul in uniform standing proudly in front of his troops – with the tag line: “Beat the pants off the Ammonites today! Can I get a like?”

A lot of what Saul posts on Facebook is, in fact, about his military success. We see him urging his fellow Facebook friends not only to like him but to join up with him. In one post, we see Saul standing before a fire announcing that he has just offered to God the ritual offering: “Don’t know where Samuel is”, Saul proudly announces, “so I just went ahead without him!” Oops!

In another post, we see Saul proudly announcing that he is off to fight the Amalekites – anyone want to join in the fun? Samuel responds to his post by saying “Just remember what the deal is – If you win, no one escapes”. However, in the next post there is ole Saul proudly standing with his vanquished enemies’ leader and the enemy’s best sheep and oxen. “The perks of war”, Saul boasts, “Can I get a like?” At this point, Samuel sends a notification – “What do you think you are doing, Saul? I saw what you posted on Facebook! You may not think so much of yourself but you are the king! You are the one the people trust, or should trust, and you simply cannot do whatever you want! This is not about you! You have to listen to God and obey God”. From that time on Samuel did not click like on any of Saul’s posts. From that time on, Samuel knew that Saul would never make it as king.

Samuel’s Facebook page read: “What a disappointment Saul turned out to be. I regret ever thinking he could be king. Sad.” He still followed Saul on Facebook but never did Samuel click “like” again.

God sends Samuel another message on Facebook: “Get over it Samuel. Move on.”

About this time, we start paying attention to another Facebook page. David is new to the whole Facebook thing. After all, he is a kid, the youngest of eight sons. He can only get online when one of his brothers lets him use his laptop. As such, David spends most of his time out with the sheep. Sometimes, when his brother lets him, he takes a lap top with him just to fend off the boredom of it all. David’s posts tend to depict him out in the middle of nowhere with a bunch of sheep saying something like “Another day out here in exciting Bethlehem!” The thing about David is that you can tell from his selfies that he is good looking – he has the rosy cheeks of someone who spends their days outside. He has penetrating eyes. David’s posts are pretty much the same – they do not vary much until one day. Suddenly we see David standing there with Samuel.  Samuel is holding his trusty bottle of oil. Underneath the photo David has written: “Check this out! I just got anointed – this dude says I’m gonna be king. Go figure!”

We know what the Facebook posts will show going forward. David will post a picture of himself standing over the massive body of Goliath holding only his sling. Saul’s posts will become increasingly erratic as his mental state deteriorates. David, on the other hand, can be seen playing his lyre in the king’s palace: “Wrote this psalm today – I thought it was good but the king didn’t seem to notice”. By now, David has his own laptop – one of the perks of being right down the hall from the king. David will become a military hero. Saul will become increasingly jealous of David. Saul will seek to get David killed. David’s posts on Facebook disappear. He is, after all, a refugee fleeing from his king.

Finally, one day, the New York Times posts a picture of the aftermath of a horrible battle with the headline – “King Saul dead.  He and his sons killed in battle with the Philistines”.

David’s next Facebook post reads: “Saul and Jonathan: beloved and lovely! In life and in death they were not divided; they were swifter than eagles, they were stronger that lions.” (2 Sam.1:23)

Not long after this post, we see another post of David depicting him being crowned King of Judah.

The very name of the social media vehicle – Facebook – suggests a superficial aspect to this widely popular way of communicating. If you saw the movie about Facebook’s founder, Mark Zuckerburg, you know that Facebook started as way of identifying college students by their faces when Zuckerberg was a student at Harvard. Zuckerberg has maintained that he started Facebook so that you could learn about other people. The fact that our society needs a tool so we can learn about other people says something significant in and of itself. We are isolated and anonymous and lonely so we go on Facebook in order to know people.

The problems with Facebook are numerous. It has been accused recently of posting fake news. It has been known to have been hacked. However, the more profound problem with Facebook is its superficiality. We love to post pictures of ourselves showing how great we look, doing things that are fun or successful or indicating how popular we are. Studies show that if people are prone to depression, Facebook only makes the situation worse. Even if you aren’t depressed you can get depressed by looking at all the beautiful people doing all those beautiful things. Why isn’t our life like that? Why aren’t we like that? What are we doing, sitting at the kitchen table in front of a screen…alone? In addition, our reality is reduced to sound bites rather than a thoughtful, honest assessment of who we are and what we do.

The striking thing is that the Biblical world knew the pitfalls of Facebook! Saul is chosen and we are told he was a good looking fellow – no other characteristics are listed in his credentials. David is described as handsome too. But he is also a kid – hardly qualifying him for such a lofty position. His physically more qualified brothers are one by one passed up. God tells Samuel: “Do not look on his appearance or on the height of his stature, because I have rejected him; for the Lord does not see as mortals see; they look on the outward appearance, but the Lord looks on the heart.” (1 Sam.16:7) It is called Facebook…not Heartbook isn’t it?

I dare say what matters to God is not the fact that we just beat the Philistines, or that we really look good in a helmet and spear, or that we have a beautiful partner and beautiful kids. What matters to God is what is in our heart. As the psalmist puts it: The sacrifice acceptable to God is a broken spirit; a broken and contrite heart…” (Ps.51:17) Rarely do you see a broken and contrite heart on Facebook! I am not saying it doesn’t happen. Rarely does it happen.

Facebook simply seems to symbolize the reality that we are a culture who values appearances. Racial profiling is possible because we look only on the outside – we see the color of a person’s skin, or the fact that she wears a hajab. ICE agents apprehend people not because they know they have a record but because they look Hispanic, therefore they must be undocumented.

It is astonishing to me that this country which claims to have at its core Judeo-Christian ethics has succumbed to being more impressed by outward appearance than what is in a person’s heart. I am not blaming Facebook only suggesting that Facebook is symptomatic of where we are as a society – more concerned with a face than a heart.