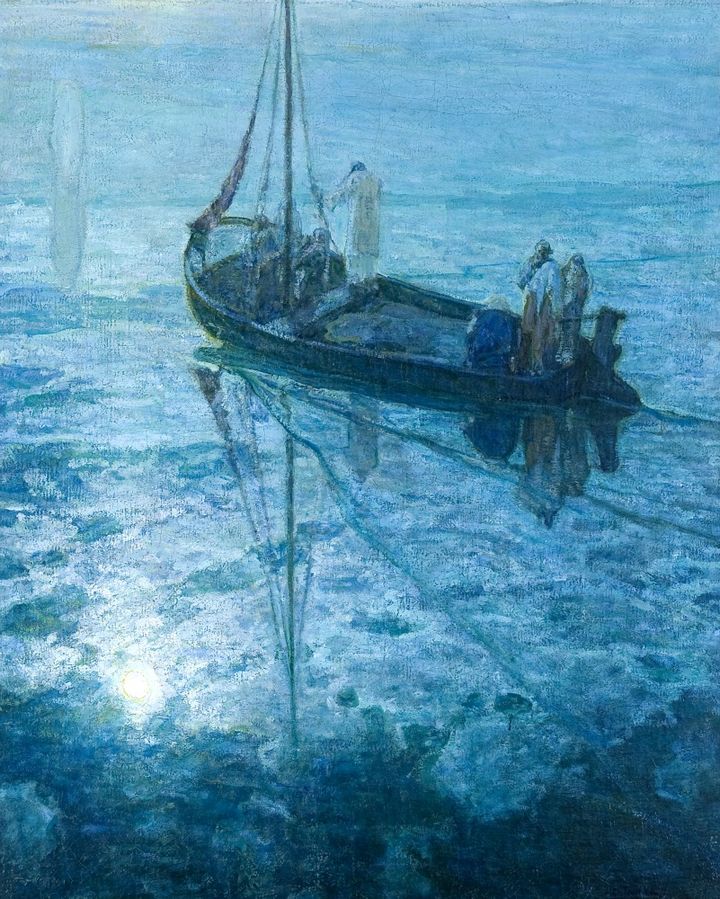 On our trip to Maine a few weeks ago, we spent a blustery morning at Reid State Park – a gorgeous spit of land with miles of sandy beaches, along with rocky coastline for climbing and scrambling over, and tidal pools to splash through.  It was grey and windy, with threatening clouds overhead.  As we walked along the beach, bundled against the wind and rain, I watched a big catamaran with three sails make its way across the horizon.  It was moving swiftly, sails flapping, completely tossed about by the waves.  “Goodness,” I said, “I feel sorry for them!  I hope they make it back to shore safely!”  Dary shook his head and waved at the sea – “This?” he said, “This is nothing!  They’ve probably seen much, much worse.  Boats sail through rough seas all the time.”

I didn’t grow up around boats.  In North Louisiana where I grew up, boats were a novelty to me – canoes at summer camp, or swimming off a friend’s party barge in Cross Lake or Lake Bisteneau, the water as warm and dark as coffee thanks to the cypress trees.  Not Dary.  To him, boats were a way of life – his grandfather was a naval engineer, a ship builder, so Dary grew up visiting his grandpa at the shipyard at Bath Iron Works and sailing around Casco Bay with his family.  Growing up around boats, he knew – sailors, lobstermen, fisherfolk – they’re used to storms.  Getting tossed about by waves and wind is just part of life on the water.  They need to take weather seriously, be prepared for it, but they wouldn’t let it stop them.

Which brings me to this strange story about a boat of windswept disciples and Jesus walking on water.  The disciples were fishermen!  They should’ve been fine in a storm – being tossed about by waves and buffeted by wind – that was all in a day’s work!  No big deal.  And wind storms are common on the Sea of Galilee – they’re part of the normal weather pattern for that region.[1]  So why does Jesus come to them?

Are they in danger?  Does he come to calm the storm?  If the disciples are seasoned fisherfolk, accustomed to the dangers of a windy night on the water, what is Jesus doing?  He has fed the crowds with just five loaves and two fish.  He sends the disciples onto the boat, to cross the Sea of Galilee while he goes up the mountain to pray.  After a windy night, straining at the oars, the weary crew sees something out on the water – the figure of a man, walking.  But that’s impossible!  “is it a ghost?” they wonder.

In Mark’s version of this story, it looks as if Jesus is going to pass by the disciples completely – until the disciples call out to him.  In this way, it evokes the Old Testament passage that Ted read, one of my favorites, with Elijah in the mouth of the cave, waiting for God to pass by.  The prophet finds that God comes not in the storm, not in the wind, not in the fire, but in the silence.  As a still small voice.

Not so here.  Jesus comes to the disciples right in the thick of the storm.  I wonder if it’s because he knew that more storms were coming.  He knew the disciples wouldn’t have the luxury of waiting for silence to encounter God.  They didn’t have time to wait for the wind to die down, for the waves to stop crashing over the side of the boat.  There was work to be done! They needed to cross over the sea, to get to Gennesseret and the people who needed healing there. He knew they would have to face relentless waves of rejection and suffering, the jeers of the crowd and the condemnation of the priests, the scorn of Herod and Pilate.  And maybe even more than that, he knew the winds would keep blowing, the storms would keep coming – the winds of poverty and oppression, all the storms that beset faithful people living in an occupied land, all the fears that drive us apart.

See, the life of faith doesn’t stay safe on the shore.  Often, it leads us to crowds of hungry people, and into the deep, stormy waters of the struggle for justice, and into the long night watch of working for peace. All of it can feel like rough, uncharted sea.

One of the early Christian symbols was a boat – and it makes sense!  The first Christ-believing communities saw themselves as pockets of safety surrounded by threatening forces beyond their control.  The work of their house churches was to spread the good news and transport souls to salvation.  You may know that the formal term for the part of the sanctuary where the congregation sits is the nave – a word which has its roots in the Latin word navis, or ship.  Many beautiful old cathedrals and basilicas even have vaulted ceilings over the nave, that look like an overturned boat.  It’s an apt description!

So the waves are crashing against the side of the boat, the wind is blowing, the disciples are terrified, and Christ calls out, “Take heart!  It’s me! Don’t be afraid!” Every time an angel or an agent of God shows up in the Bible, they say, don’t be afraid… which makes me think being in the presence of God must be terrifying.  Makes sense to me that the rest of the disciples seem to hunker down in the boat with their life jackets on.  But Peter – Peter, Petros, the rock, risks stepping out of the boat!  He tries to join Jesus out on the water.

As soon as he’s out there, he realizes it’s not a good idea.  The wind is too strong, the waves too high.  What do rocks do?  They sink!

As Peter’s faith wavers, he cries out, and Christ reaches out to save him.  Somehow, together, they get into the boat.  Terror gives way to awe and amazement, and the disciples fall down to worship.  “Truly, you are the Son of God,” they say.

This year has felt like being tossed in a stormy sea, hasn’t it?  The waves have battered our boats relentlessly: waves of sickness and despair, uncertainty and anxiety, waves of anger and frustration.  I keep thinking about the poem by Stevie Smith, called “not waving but drowning” – there are a lot of folks who are in over their heads, who have grown weary fighting the waves and are overwhelmed.  Some are overwhelmed by loneliness, especially those who are made vulnerable by age or pre-existing conditions and must stay separated from friends and family.  Those who have lost jobs are weary, beset with worry about how to make ends meet, while congress is mired in debate. Those who have children are wondering how they’ll make it through another semester of working full-time without childcare or school.  Too many people are out way too far, not waving but drowning.  So what are we to do?

Everything points to staying in the boat.  It’s safer there, sure.  We know the boat.  There’s something to cling to.  But storms are a part of life. They can be dangerous but they also clear the air, refresh the earth, and if this story tells us anything, it’s that Christ meets us in the midst of them, saying Do not be afraid!

I’m still getting to know you all, but I *think* you are a little like Peter.  You seem to me like the kind of folks who are willing to step out of the boat, to take risks even when it’s scary.  To go beyond and outside the safety of your building, to wade into the deep water of listening to each other, of engaging your neighbors and trying to build bridges in a fractured community.  To stand together to face the winds of poverty and racism and sexism and discrimination with confidence that you do not stand alone.  Now, don’t get me wrong.  We aren’t called to be reckless, ignoring the weather report and leaping from the boat without first bolstering our faith and learning how to swim.  We need to take weather seriously, be prepared for it, and not let the storms stop us.  Because storms will come.  But when the waves are high, and our spirits are low, and our faith wavers – that is when he finds us, saying “Take heart!  I am here!  Do not be afraid!”

Seamus Heaney’s epitaph reads, Walk on air, against your better judgment.  It’s good advice!  I promise you that I cannot walk on water.  But I trust in the one who calls us to step out of the boat.  And I wonder what amazing things might happen when we find the faith to take that step together!  Thanks be to God.