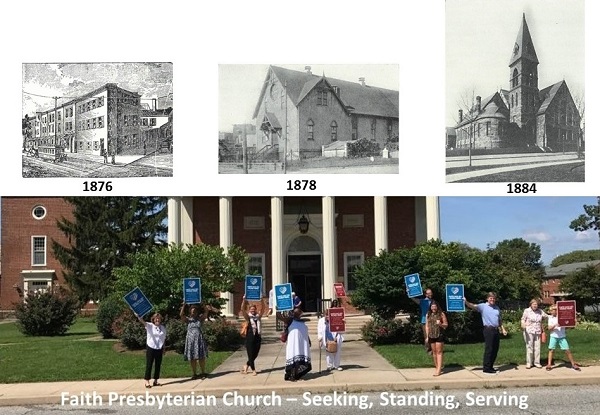 On the front of your bulletins this morning are pictures of all the houses Faith has lived in! Our family began in a space over a blacksmith’s shop. We were a mission church of the First & Franklin Presbyterian Church and our name was Faith Chapel. A year after our founding, we moved into a more church-like home simply called the Chapel. Eventually, the first real sanctuary was built in 1884. When the congregation began to move to the northern part of the city, it was decided that the church should follow its people. In the early fifties, Faith Church moved to our current location. Early photos of this part of city indicate there wasn’t much here at the time. It took real vision to imagine what our neighborhood would become.

I begin this way this morning because of our text – the account of the building of the first temple by King Solomon. As you will recall, last Sunday we heard about how David, Solomon’s father, was chosen as the first king of Israel. Even though flawed, David was a great king and he established Jerusalem as the center of his kingdom. However, because of his many battles with neighboring threats, David was never able to build a house for God causing David to observe that, while he lived in a fine palace made of cedar, the God of Israel lived in a tent. (2 Samuel 7:2)

It falls to Solomon to build the temple his father had always wanted. The Ark of the Covenant is brought to rest in the in the holy of holies. Solomon dedicates the temple and announces: “The Lord said that he would dwell in thick darkness, I have built you an exalted house, a place for you to dwell forever.” (1 Kings 8:13)

The “forever” part of Solomon’s announcement didn’t quite pan out. Solomon’s temple would be destroyed by the Babylonians. The rebuilt temple would also be destroyed. When the Greeks and, then the Romans took over Palestine, the temple was ruined until Herod decides that, in order to symbolize his rightful leadership, he would build the third temple. The Romans would destroy that ambitious project in 70 CE. The temple would never be rebuilt and, as you know, the temple mount now is the home for the Dome of the Rock, the holiest place of Islam.

Our current church home was built in the fifties, often known as the era of edifice complexes. Many of the largest and most imposing church structures were built during the fifties when the faithful, it seemed, needed to build and they needed to build churches that looked like churches. I love my old New Yorker cartoon which depicts a typical white church with a tall steeple. Its sign out front proudly proclaims “A Church that Looks Like a Church”.

When I was growing up, my siblings and I always wanted to go to a church that looked like a church. We moved around a lot because of my Dad’s job and more often than not we worshipped in rented spaces due to my parent’s penchant for new church start ups which is how I was confirmed in the Bear Pit restaurant right in front of the barbeque pit!

Church buildings are important. For one thing, they tell us a lot about a church’s theology. In the 1400s, in order to raise money for the construction of St. Peter’s Basilica in Rome, the Roman Catholic church sold indulgences. A crude way of describing indulgences is to say that you could wipe the slate of your life clean and assure a place in heaven if you bought one of these indulgences. A monk, Martin Luther, thought indulgences were theologically inappropriate. He also had some other things he thought the church needed to change. He was every pastor’s most annoying member – the guy who wants to fix this and that. Legend has it that on October 31st 1517, 500 years ago this week, Luther nailed his 95 suggestions on the door of the church in Wittenburg, touching off what would become known as the Protestant Reformation.

Of course, Martin Luther was only the spark that ignited this massive shift in the way the world worked. John Calvin, a Swiss, would influence John Knox a Scotsman and the father of Presbyterianism. At one point, the followers of John Calvin would distinguish themselves from the followers of Martin Luther who became Lutherans. The reformation would change everything. Democracy as we know it in this country is based on the representative form of government Presbyterians adopted. We are governed by those elected by a congregation.

Reformation’s radical change can be seen in the houses of worship that were built in its wake. The elevation of the pulpit signified the shift from the centrality of the Eucharist, or communion, to the centrality of the sermon. Church interiors became more simple, signifying a move away from what was thought to be distracting ornamentation. The Puritans wanted to purify and this attitude was reflected in their churches. The Congregational Church is descended from the Puritans. I served a Congregational church in Brooklyn. One of our members found a lovely Celtic cross that she thought we should have on the communion table. People were outraged because, in their minds, Congregationalists don’t like symbols! Clear glass windows replaced stained glass because John Calvin thought the artwork of God in nature should be visible. At one point, organs disappeared, to be replaced by the human voice singing psalms. However, thankfully that reform did not last long! Now churches have praise bands and video screens. My heavens, some even have steel drum bands!

You see, there is a problem with temples or church buildings. Solomon built his temple with conscripted labor; slaves in other words. In addition, I think the question is valid as to whether Solomon built the temple for God…or for his own monarchy. Jesus confronted a temple that housed corruption prompting him to drive the money changers out and to announce that the temple would be destroyed in three days. We, too, are at risk of worshipping our buildings and not the God they are supposed to house. Don’t we think that God really wants us to have pews in order to worship rightly? We get to worshiping the building and not the God it serves. The various temples in Jerusalem were destroyed but not the faith they housed. It seems appropriate that there should be some symbol here in our sanctuary reminding us that our first building was a humble blacksmith shop. Our church buildings can be destroyed. What then will happen to our faith?

Two of our Presbyterian congregations are merging which will require one to give up their church building. This has been a very painful process for Brown Memorial Woodbrook. And, yet, I would maintain it has been a life-giving process for both congregations.

The merger of Brown Memorial and Govans is indicative of a prevailing trend. When I was ordained in the late 70’s there were over 3 million Presbyterians in the US. Today there are about a million and a half. The number of “Nones” out numbers people who claim a faith tradition.

History, it seems to me, serves to remind us that the “only thing that is constant is change”. Therefore we ought not to be afraid of what is coming…whether it is a decline in church membership or in our worship practices or in our government. We are a church reformed and always reforming.

In a recent article about the reformation and Presbyterians specifically, the author asks whether it would make any difference if the Presbyterian church disappeared altogether for lack of membership. Yes, she answers. We may look very different but our particular brand of reformed theology has given the world three distinctive ideas that should prove invaluable and enduring: