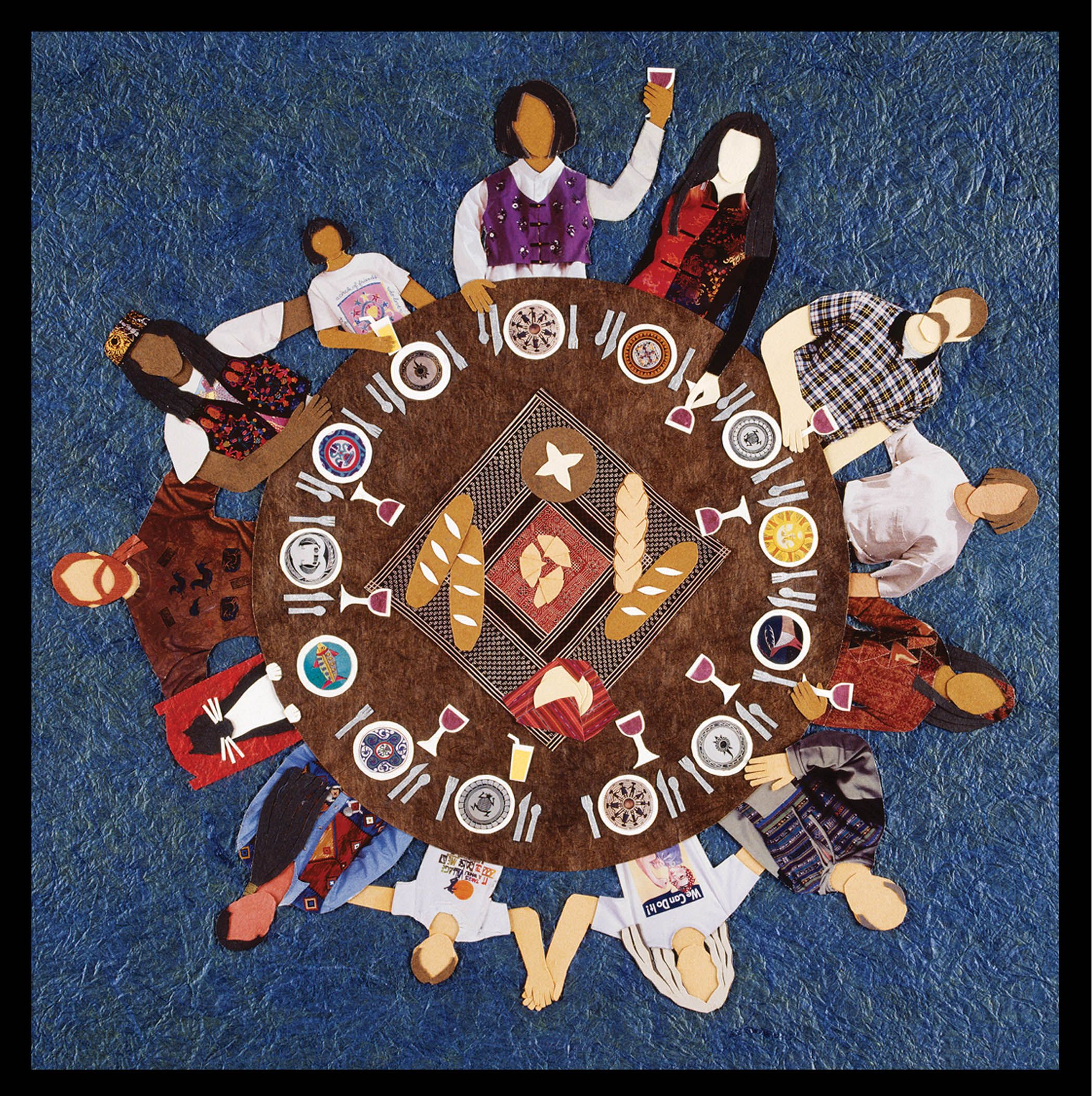 Things have been so calm and peaceful this week, I thought we needed a really difficult and violent parable to shake things up. But really, I’ve committed to the discipline of preaching the lectionary, and this is what we got – but I do believe the Bible is a living Word and the Spirit is able to work in and through the text, so…

Here’s how I wish this story had gone:

A farmer planted a vineyard, then leased the land and went away. But he was invested in the productivity of the land, and wanted to see the vines and his tenants thrive. So, he stayed in touch with his renters, offering support for their farming, resources to buy the equipment they needed. When it came time for the harvest – about five years after planting grapevines, by the way, he sent workers to help cut and crush grapes, so that when the wine was finally done and sealed into jars, there was a great feast to celebrate. The landowner came, and sat at table with the tenants and everyone ate their fill. At the end of the night, they toasted their hard work and said, together – we did this!

Farmer planted a vineyard and leased his land, and went away. While he was gone, the tenants labored long and hard, and dreamed of owning the land outright. So when it came time for the harvest, they organized. They pooled their resources, mapped their power, and worked together to negotiate with the landowner. When the servants came to collect the rent, the tenants sought to buy the land – one parcel at a time. When the owner refused to sell, the tenants strategized. They complained to the local government about their absentee landlord, and he was levied with fines for unpaid taxes, and fees. They made signs to draw attention to the landlord’s neglect, and made a campaign on social media calling on people to boycott his wine. When he still refused to sell, they created a land trust, and were able to take over unclaimed land in their region, and grow and plant grapes of their own.

But that’s not how this story goes. It isn’t a story about community building or relational organizing to hold absentee landlords accountable. It’s an allegory about Christ himself, one that Jesus tells to the leaders in the Jerusalem temple as the tension between them reaches a boiling point – right before they conspire to have him arrested and killed so that his messianic uprising doesn’t get out of hand. The allegory is fairly clear: God is the landowner, the religious leaders are the tenants who ignore the prophets and who will soon reject Jesus, condemning him to death.

Why does Jesus tell this awful story? What the heck are we supposed to make of it? First, let’s not make the sad mistake of countless Christians before us and misinterpret the story as one that justifies violence of any kind. Those who would use this parable to explain Anti-Semitic views or violence miss the fact that the gospel writer, Matthew, was Jewish. His community of Christ-believers were Jewish, seeking to differentiate themselves within a broader Jewish community by critiquing their own religious leaders for hoarding resources, collaborating with and benefitting from Roman oppression, and rejecting the ministry of Jesus. This parable is part of the gospel writer’s effort to form the identity of his fledgling faith community…to make sense of violence that has already happened to them and to Christ.

My first or second year in ministry, I made a pilgrimage to the Iona Community. The isle of Iona is a tiny Hebridean island off the western coast of Scotland, where centuries ago monks built a beautiful monastery that became a center for Celtic Christianity. The Iona Community is a more recent development, an ecumenical community committed to peace and justice, the rebuilding of community and the renewal of worship.[1] and I didn’t have a lot of money – I had enough to get there, but not enough to stay there – so instead going to the abbey for a conference, I went to a work week at the Iona Community’s outdoor education center on the isle of Mull. A beautiful, windswept inlet right on the water, Camus is an old quarry – visitors stay in the cold, dark stone dormitories built and used by miners a century ago. My job was to help prepare the garden for spring, turning beds, making paths, planting seedlings, and weeding. My main project during the week, though, was to build an herb spiral. Now if you, like me, have no idea what an herb spiral is, let me illuminate you – it is not bread. It’s an intricately stacked rock wall built into a spiral, filled with soil, so that herbs can be planted in. It creates microclimates for different herbs, providing shade, sun, and drainage at varying amounts. Have you seen rock walls? Some look as if the rocks just fell into place, a satisfying jumble of stone. They are not easy to build. Every single rock has to fit just so with the one underneath. They are precarious if not stacked carefully and solidly. One misplaced stone and the whole wall falls apart.

Scotland in March and April is still chilly – beautiful, but often rainy and a bit cold. So building an herb spiral involved a lot of muddy rock carrying and sorting in the rain, seeking to find the next right rock, the perfect slant or size, to continue the wall. Often a rock that had been tossed aside earlier would work in a different spot. Took a lot of patience, but when I could find a rock that would fit exactly where I needed it to, it was amazing!

When he finishes the parable, Jesus quotes a Psalm, saying – the stone that the builders rejected has become the cornerstone. Now before they were decorative or commemorative, a cornerstone was the first block laid when building a new building. It created the foundation for the structure that was to come  In ancient times, animals were sacrificed on the cornerstone, to ensure a solid and secure structure would be built. In saying this, Jesus was surely alluding to his death and promised resurrection. Remember, he’s speaking to the religious leaders who do not like what he’s preaching. They do not want the temple to be a house of prayer for all people … only for the righteous, those who could afford to abide by the law, therefore only for the wealthy. They do not want folks who are unclean to be welcomed or healed. They do not like the common people getting riled up in the streets, crying out for justice and salvation, drawing the ire and attention of Rome. Of course, they reject Jesus, otherwise they’d have to listen to him, and that might change everything.

The stone that the builders rejected has become the cornerstone. Christ’s gospel is the cornerstone – his ministry of healing, love, and justice. His work to embrace the outcast and welcome the stranger, to speak truth to power and serve the poor – on that foundation the church was built.

I am tempted to let this violent, difficult story be bound by its context, to let it be locked in space and time as just a word from Matthew to his community, or to hear it only as a word from Jesus to the ones who would reject him and turn him over to the State to be put to death. Let it teach us about the violence and tensions of that time, but not our own. But, there are more parallels to the violence and tension of this time than I’d like to admit. The specter of violence hangs over this election, with far right-wing white supremacists standing back and standing by to do what, I’m not sure but I don’t want to find out. The violence of more than 400 years of slavery is still reverberating in our country, evident in the brokenness of our criminal justice system, segregation in schools and neighborhoods, racial health and wealth gaps, and visible in the tension and trauma that poured into the streets crying out for racial justice this summer. I could go on. It makes me wonder – how much are we like the religious leaders of Jesus’ time? What voices are challenging us that we don’t want to hear? What healing, peacemaking, community building, justice seeking work do we reject as impossible, too idealistic, too radical, too difficult? Is that the work that Christ might actually be leading us to? What word of hope does this violent parable have in a world where violence is still so prevalent?

Maybe the word of hope is in the landowner who did not give up on the tenants, but sent person after person, even his own child, to intervene and offer them another chance to give back their portion of the harvest. Maybe the word of hope is that the rejection of the religious leaders and the violence of the crucifixion are not the end of the story – that God’s love, and life, and the power of the resurrection actually prevails.  Love wins, not rejection.  Life wins, not death.

Later on, that week on the isle of Mull, I made it to Iona for morning prayer. After the service, I walked round the Abbey and was invited for tea with the Iona volunteers. I’m not sure how it happened, I think they just noticed I was an outsider and made space for me at the table. A table filled with young people from all over the world. They poured tea, and shared scones. And told me about their life and work on Iona, asked me about my work at Camas, how I’d ended up there if I lived in Georgia. It was a small thing, scooting over, making room, making me feel welcome. But it meant the world to me.

Today is world communion Sunday, when we celebrate our unity with Christians all over the globe. A day when we remember that the promised kin-dom of God looks like a feast, a table set with enough food for everyone. Where we scoot over and make room for everyone who shows up. That the feast we celebrate today, and it is one I’m grateful to be part of.