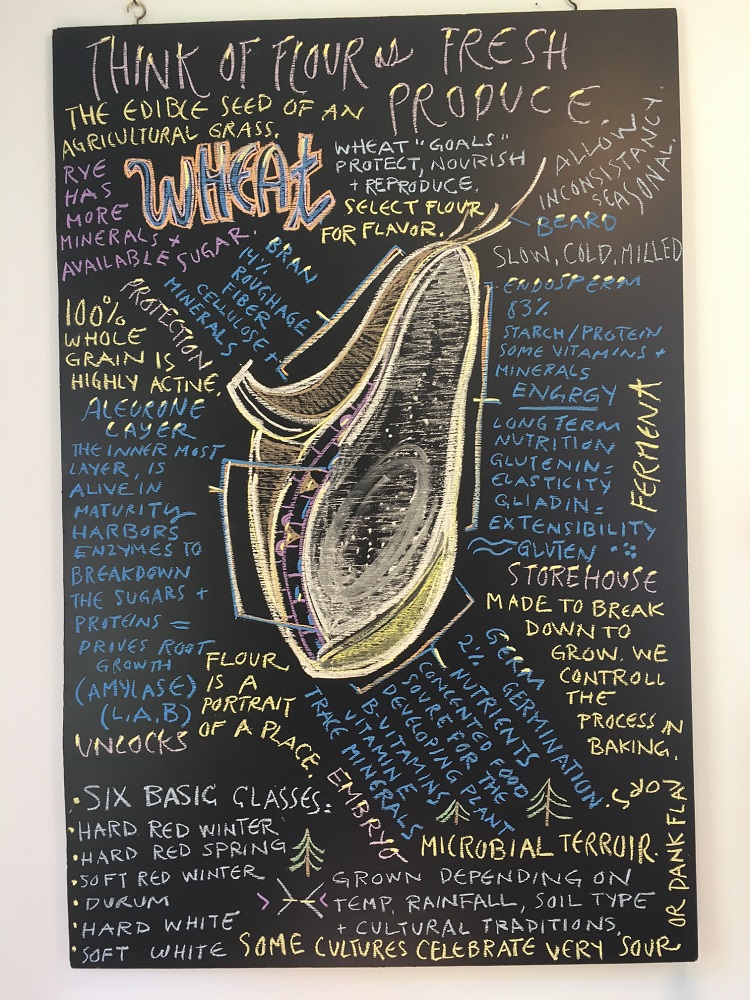 A few years ago, I got to go to bread camp.  At the time, there was a baker with a tiny kitchen in a little town outside of Asheville, NC hosting workshops on sourdough breads, pizza, croissants, and pies – teaching the fundamentals of baking with natural leavening in a wood-fired oven[1].  It was an awesome experience, tucked in amongst the trees in the Blue Ridge mountains, with women from across the country learning the secrets and science of turning flour, water, yeast, and salt into lofty, airy loaves of bread.  The baker, Tara Jensen, taught me how to mix and shape the dough, using time and temperature like ingredients in the recipe, making a series of folds over several hours.  The folds transform flour and water from a slack, shaggy mess into a soft, elastic, pillowy mound.  We normally think about kneading bread, but this method is different.  Gentler, over a longer time.  Turning and stretching the dough, I learned, organizes the gluten strands into a framework strong enough to hold the air created when the bacteria in the leavening eat the starch and sugars in the flour… which causes the bread to rise – clearly I can geek out about this.

But bread is amazing!  Most loaves – round boules, long baguettes, batards, miches, country loaves, are all made with just four simple ingredients: flour, water, yeast, and salt.  Combine them in the right way, with time for water to hydrate the flour, the salt to dissolve, bacteria to grow and transform sugars to develop flavor and create rise, you get incredible results – something so different from the original ingredients you have to wonder if magic was involved.

Humans have been making bread for many thousands of years, it is central to many food cultures.  When our Jewish siblings observe Passover in a few weeks, they’ll break unleavened bread as a reminder of their ancestors’ flight from Egypt – who left in such haste they didn’t have time for the bread to rise.  It should not surprise us that two thousand years ago, Jesus chose bread -ubiquitous even then- to play a crucial role in our common table: a symbol for his body, broken out of love for us.  He tells us to eat and remember.  My favorite part of communion sometimes is what happens to the elements afterwards, when kids swarm the table at share pieces of the loaf to tide them over until lunch, laughing and scattering crumbs everywhere.

This isn’t a text about communion – Jesus is talking about transformation.  Still, I have to wonder if Jesus was thinking about bread when he described a grain of wheat falling to the ground and dying to bring forth a field of waving grains and, eventually, … a loaf.

Jesus surely was worried and wondering something all of us have wondered at some point, perhaps more of us than usual after the year we’ve had: what would happen to the disciples after he died?  Maybe he knew that after his crucifixion, his disciples would die a hundred other, smaller deaths – the death of their hopes, an end to their dreams of revolution, their ambition, and for a time, maybe even their vision for community and justice would die, too.  So he was seeding hope for what was to come, telling them the Christian story of living, dying, and rising again: a cycle of birth, death, and new life/renewal.  The disciples just didn’t understand it yet.  I wonder if we do, too.

The baker was really into varieties of fresh flour, and as we waited between folds, she taught us about different grains, showing us all the parts of a grain of wheat – a wheat berry.  The covering, the husk or the bran, is what’s stripped away to make white flour.  It’s also what has to be softened and broken down in order for the wheat berry to sprout and grow.  The central part, endosperm is the starchy powerhouse that fuels the seed as it sprouts, it’s what becomes flour as we think of it.  Then, the germ is what germinates the wheat sprouts.  Think of flour as fresh produce, she told us – it’s not a shelf-stable item, it’s alive, and best when freshly milled, and incredibly healthy for most people.

As one whole grain enthusiast said, “It can be easy to forget that the cereal grains we eat are actually dormant seeds, holding the potential for whole new plants within their walls. Just like the seeds you might plant for your garden, these grains are simply waiting for the right temperature and moisture to activate the growth process – waiting for the right conditions to sprout.”[2]

We have just survived the most challenging and difficult year in recent history.  A year in which we let go of one way of being and took up something different.  And we are poised right now on the threshold, as more and more people get vaccinated, looking toward a re-opening, re-connecting, in many ways a re-birth.  The past months have stripped away the rough protective husk, leaving us raw but possibly also ready for something new to grow, to sprout and bring forth new life.  It’s easy to see what is most important.

In our text this morning, some Greeks ask to see Jesus.  They ask Philip, who asks Andrew, then together they go to find Jesus.  The gospel of John is thick with symbolism to show that Jesus is the real presence of God among the people.  Layers of meaning mean almost everything points to something else.  Commentators say that by having Greeks come ask to see Jesus, John shows the future growth of the early church beyond the Jewish community.  Christ’s statement at the end of the passage – that when he is lifted up (ascends after the resurrection) he will draw all people to himself – foreshadows the growth of Christendom also.

This is the last time Jesus teaches publicly in the gospel of John before he is executed.  In these verses, he’s explaining what’s about to happen to him. It’s not clear if the Greeks ever do see Christ face to face.  They’ve heard he raised Lazarus from the dead, so they want to see him and see if they can believe him capable of such a feat.  But I don’t think they get to see him – the text makes it seem like Christ was talking with just Philip and Andrew.  The next time the Greeks might have a chance to see Jesus, it would be under very different circumstances – he’s not in public again in this gospel until his crucifixion.  If that’s all they see, I wonder what they believe about him.

I wonder, what is the alchemy that must happen within us, in our hearts, in our lives, to transform us into disciples?  What helps prepare us, and makes us ready to follow him through the agony of Gethsemene, to the pain of Calvary, into the silence of the tomb?  How do we help others see him, see God in us?  What is the bran, the hard outer coating, that must be stripped away or softened so that faith can sprout and take root within us?

The PCUSA is part of the reformed tradition – the branch of Christianity that grew from Martin Luther’s critique of Catholicism so long ago.  We talk about the church reformed, always being reformed: being and becoming the church is a process that has unfolded over centuries and is ongoing – as we adapt to changing circumstances, seeking to faithfully bear witness to the God of love and justice in every time and place.  In the same way, our discipleship is a lifelong process. In fact, maybe we are a little like bread: folded and re-folded, shaped and re-shaped over a long time, building up the inner structure so that we are able to uplift, to grow exponentially and resist collapsing in the heat of the oven.

And the oven is hot.  The fires of racism and white supremacy took more lives this week, eight people – six of whom were Asian American women – all with families, dreams, communities that relied on them.  How do we fold and re-fold, shape and re-shape our hearts and our communities so that they are upheld by structures strong enough to withstand the heat?  Strong enough to uplift instead of oppress, include rather than exclude, to protect and preserve life?

This work is hard.  This time has been difficult.  Sometimes it may feel like we are being stretched and folded far beyond our capacity, challenged to change more than we thought possible.  But the miracle of bread is that when the conditions are right, with time and patience, simple ingredients are transformed into something incredible.  So friends, like bread – let us rise!

[1] The baker is Tara Jensen; learn more about her, her workshops, and her cookbook (A Baker’s Year and another on sourdough soon to be published), at https://www.taraejensen.com or follow her on Instagram @bakerhands.