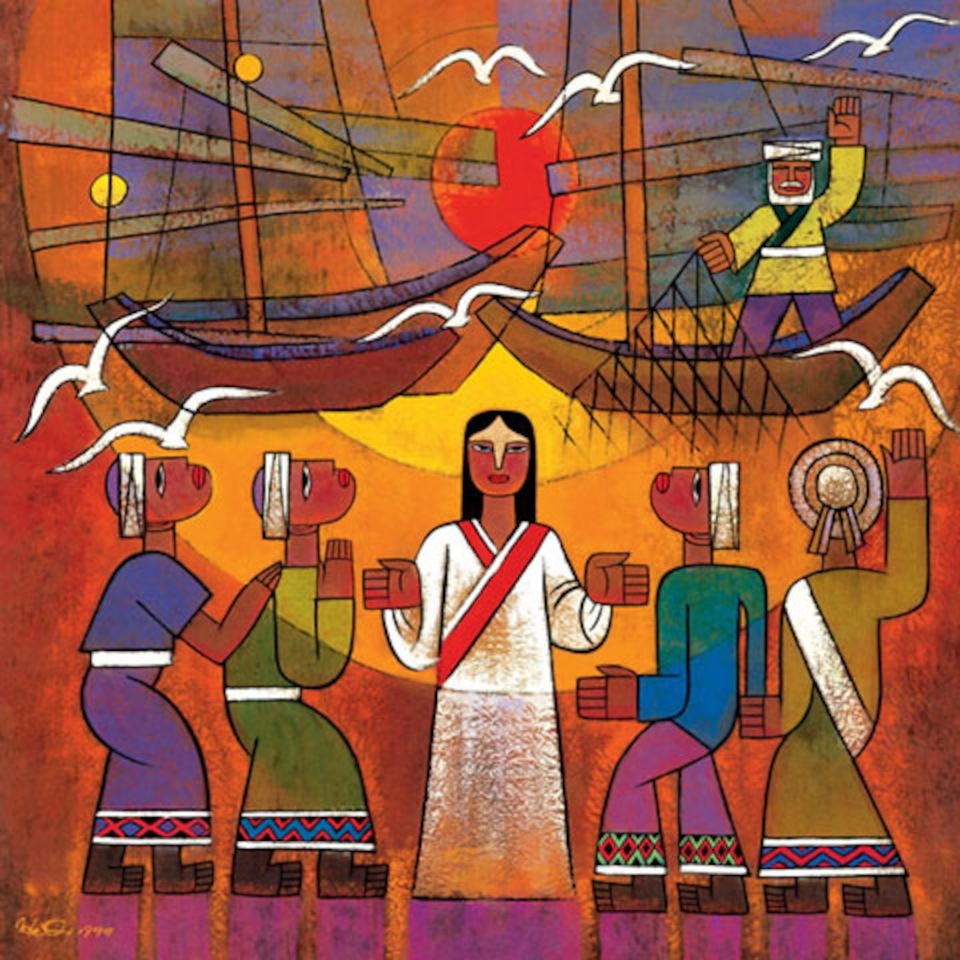 I wonder if the sun was bright that day, glinting off the water, gulls bobbing on the waves in the distance.  Can you see him squinting at the horizon, the corners of his eyes crinkled as the wind blew the hair back from his forehead?  Simon didn’t know what he was looking for, off in the distance – this was an ordinary day, like any other.  But something kept drawing his eye, first out to open water, then back to the shore, back to the path to town where they’d carry their catch later on, the path to the house he’d been born in, the hearth where he’d learned to mend nets at his father’s knee, the path that led to everyone and everything he’d ever known.

Simon and his brother Andrew worked hard, up long before dawn to get fish to market by morning.  It was backbreaking work: straining at the oars, doing battle with the currents and waves.  Heaving the nets into the water, and hauling them up again with calloused hands, wet and dripping. Water soaking his tunic and sandals over and over, as soon as they dried, wet again.  And the smell… he was used to it, mostly, it had been part of his life since before he could remember – the stink of the mudflats, the stink of the fish, the particular smell of the sea.

It was friendly work, he didn’t mind it.  The crew on his father’s boat was like family.  The women in the market were shy, smiling when they bought his tilapia, the sardines to preserve in oil.  He was lucky, really, to work alongside guys he could trust with his life, who had indeed saved his life more than once through stormy nights at sea – his brother, and their friends and fellow fishermen James and John, the sons of Zebedee.  The ones he could wait with in silence as they watched the net fall into the water, and laugh with as they pulled it up again, even when it was empty of fish.    No, he didn’t mind the work but something was missing.  Some part of him felt as empty as the nets he cast into the sea.

When he saw the man walking along the shore, he didn’t think much of it at first.

But then, he couldn’t look away.

As he watched the man walk on the shore, Simon began to feel as if … as if he’d come to tell them something.  To show them something.  Simon Peter was curious.  Who was he?  What did he want with them?

It looked like that teacher, the one who kept on talking about good news – who was saying the time had come, a new kingdom had arrived, one that might topple Roman rule, a kingdom of God.

Mark’s gospel is spare, a rapid re-telling of Christ’s life and ministry.  We don’t get much detail, just the bare facts.  John was arrested, and that pushed Christ into the spotlight – compelling him to start his ministry and declare the good news!  To say the time had come, God’s reign was here.

Maybe John’s arrest and beheading pushed Jesus over the edge, maybe that was the last straw.

Maybe Jesus’s anger and frustration with the world as it is gave him the courage to denounce Rome, to claim allegiance to a kingdom invisible to the naked eye yet real all the same.

Maybe it was just the time God intended.  Time for the world to change.  Whatever the reason, Christ set out and began to build a movement by calling people to repent, to believe the good news, and to follow him.

And, people did.  Just like Nathanael and Philip last week, Simon and Andrew, James and John are compelled to follow Jesus.  It’s surprising that they agreed to go with Jesus, because they haven’t seen him do anything yet.  No one’s been healed, no water turned to wine, no loaves and fishes multiplied.  There’s no persuasive speech, no chance for his charisma to shine. they don’t even know where he’s going or why.  He just calls to them and they follow – to learn to fish for people.

Have you ever wondered what that means, to fish for people?  I’ve often heard it as a call to evangelize – to catch disciples for Jesus.  But Ched Meyers, in his brilliant political analysis of the gospel of Mark, suggests that the invitation to fish for people evoked similar fishing imagery used in the Hebrew scriptures.  Meyers observes that Galilee’s fishing industry was growing around the time Jesus would’ve been preaching, but the fishermen didn’t see any of the profits.  They were at the bottom of a towering economic hierarchy.  Exploited.  Frustrated.  Just scraping by while others profited from their hard work.  So by calling the fishermen to fish for people, Jesus alludes to the Jewish prophets who used fishing imagery to decry the exploitation of poor workers by the powers that be.  Jesus is calling the fishermen to join a revolution.  One that they’ve wanted for a long time.  That might explain why they’re so quick to respond to his call.

Now, they must have known the risk they were taking.  There was the macro-risk – they surely knew about John’s arrest, and would have known how dangerous it could be to challenge Rome or the religious authorities.  And the economic risk of leaving their source of income, their livelihood behind.

But there was also the micro-risk: the personal risk we all face when we dare to try something new – to take a new job, to leave friends and family, everything they’ve ever known behind and strike out in a new place.  The risk of failure, the risk of change.  But these guys don’t hesitate!  Christ calls, they follow!

We talk a lot about call in church world.  Your calling can mean your work, your vocation.  Or, it might be a particular task at a specific time.  A calling could be just part of who you are, like some are called to be a foster parent, or to create art, or to feed hungry people.  Or a calling could consume your life.  But who calls us?  And how can we hear it?

I was struck this week by a conversation between the brilliant young poet Amanda Gorman and CNN’s Anderson Cooper following her stunning recitation at the inauguration on Wednesday, because Gorman talked about call.  She said, there is a mantra she tells herself before she begins to write, and before she recites her poetry in public.  She tells herself:

“I am the daughter of Black writers. We are descended from freedom fighters who broke their chains and changed the world. They call me.”[1]

Gorman hears the call of her ancestors, and it gives her courage – courage to write her truth, to speak truth to power.  Her calling empowered her to cast a vision of restoration, redemption and repair for a bruised and battered nation.  To be light for a world in desperate need of it.  If that’s not a sacred calling, I don’t know what is!

Maybe Simon and Andrew, James and John had been waiting for a long time for someone to call them.  Maybe those long, weary nights on the water had made them long for something different, something more.  Maybe all that time spent fishing, meditating by the water, out in the quiet of nature, opened their ears to hear the call when it came.  Maybe they were frustrated by the world as it was, and wanted to make it into what it could be.  For whatever reason, they were ready – when they heard the call of Christ, they were ready to go, to leave backbreaking work for work could be heartbreaking, but would feed their souls better than fish ever would.  Maybe the call gave them courage to step out in faith and trade calloused hands for calloused feet, following the good news into the world.

I believe Christ calls each one of us to follow him.  Sometimes it sounds like an inner yearning for meaning, questions that compel us to learn more, then to do more.  Sometimes it sounds like Jonah’s call to the people of Ninevah, a call to repent and to change.  Sometimes it sounds like his call to Simon and Andrew, James and John – come, follow, do this work that needs doing!  Like the call Amanda Gorman hears, we’re called to trust the wisdom within each one of us, the wisdom of our ancestors.  This call gives us courage to do hard things.  It’s a call that inspires faith – not faith as an ascription of belief, but faith in God and faith in ourselves, faith as something embodied.  Faith that leads us to go where we are needed.  To take God’s good news into the world.

I hope this week, we’ll try to find space to be quiet and listen to where God is calling us.

Maybe there is someone who is sick, for whom a phone call or a text could be a healing balm.

Maybe someone you know is hurting or in pain, who needs to hear words of kindness, or would appreciate a note of encouragement.

Maybe there is a person with whom you are in conflict, who needs to experience grace.

Maybe there is an organization or neighborhood where a few hours of our time could make a real impact.

Maybe there is an opportunity to serve right here in our church, a way for you to offer your gifts to further our mission and ministry.

Maybe there is an issue that is dear to your heart, that needs the advocacy only you can offer.

Maybe there is someone whose body is threatened, whose beliefs are denigrated, whose rights are denied, who needs you – who needs us – to stand with them.

Maybe there is a person who doesn’t know, who hasn’t heard the good news that they are blessed and beloved, that they are a child of God.  Could you be the one to tell them?  Could we?

I pray that we will find space to listen and trust the wisdom within, to hear the voice that is calling us, leading us on the journey.  May it be so.

[1] Gorman, Amanda, interview with Anderson Cooper on CNN “Overjoyed: Hear from the poet who stole the show at the inauguration,” 1/20/21, https://youtu.be/qHhut5nhI8g