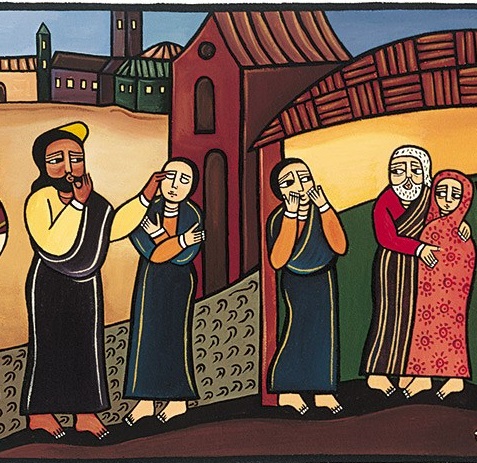 How the Light Gets In

How the Light Gets In
Rev. Christa Fuller Burns

I read an article recently about the actor, Mickey Rourke in which Mr. Rourke talked about his trouble childhood. His father was abusive and Rourke took his desire to defeat of his father out on others, becoming a fighter himself who would fight over anything. He also resorted to drugs and other destructive behavior. Finally, Rourke went to a priest who talked him into getting help. Rourke didn’t say it but I wonder if part of what the priest was able to do for him was to enable Rourke to see himself as more than the kid he was – the fearful, fighter, substance abuser. And I wonder, too, if he was always seen in his neighborhood as that angry, violent kid.

We could ask the same question of the man born blind. Jesus happens upon him – a man blind from birth. His disciples want to know what he did to be so cursed. Or, was it something his parents did? We are so sophisticated now, are we not? We know too much science to come to the conclusion that blindness is caused by something we did wrong. However, I would ask every parent in the room: have you never looked at your child who may be struggling in some way, whose marriage failed, who may be handicapped in some way, who may be addicted in some way and asked yourself: What did I do wrong? What should I have done that I didn’t? Maybe the disciples question isn’t so naïve.

Jesus tells them that no one did anything wrong. The man was born blind so that God’s works might be revealed to him. In other words, the man’s affliction is the opportunity for the light to get in. In the words of the sadly now deceased song writer, Leonard Cohen:

Ring the bells, that still can ring
Forget your perfect offering
There is a crack in everything
That’s how the light gets in. (Anthem)

Jesus spits and makes some mud which he smears on the man’s eyes, telling him to go and wash it off in the pool of Siloam. Then Jesus disappears.

The man washes his eyes out and is able to see.

His neighbors, those who’ve known him from the time he was born, want to know if this is the same guy, you know, the guy who sat here and begged? Is this the same little boy who felt like it was him against the world?  Some said, no, it can’t be. But, it is me, he said. I am the man you know. How come you can see now, they want to know.

So where is he, then? I don’t know the man said. I don’t know. It’s interesting, isn’t it, that people tend to see us as they did when we were children? Isn’t that Joseph’s boy, they asked about Jesus? Our perceptions are trapped in our memories of how someone should look or be or not be. Here is this man who has been radically changed standing right in front of us but we don’t see him because, wait, isn’t this the blind kid? Didn’t we know him when he was in diapers? We know this kid. He is blind. Who’s blind?

Since the Pharisees don’t believe the man, they go and get his parents. Is this your son? He says he was blind and now he can see. Is that so?

The parents admit he is their son. They admit he was born blind. But they chicken out when it comes to saying how their boy got his sight. Ask him yourself, they say. He’s old enough.

It seems the parents didn’t want to get kicked out of church. If they admitted that they knew who had given their son his sight, they would be talking about Jesus. Isn’t that something! Talking about Jesus could get you in trouble at church! Change is tough, isn’t it? How many parents cannot admit their child is Gay? I remember John Lewis telling about his involvement in the Civil Rights movement and how his parents were not so supportive of his activism. How many kids don’t claim their abilities as students because of what their peers will say about them – how it is un-cool to be smart? One of my friends in college was from Tupelo Mississippi. We keep in touch at Christmas. One year she wrote me that her parents had disowned her because her daughter married a black man. Maybe they, too, were afraid of what their church folk would say. Change is hard. But that is what Jesus did – he changed people – blind beggars, an outcast woman, a Pharisee, a leper. And, you know what, sometimes Jesus changed people even on Sunday, even when it broke the law, even when it upset the church folk. Who’s blind?

According to the church calendar the Sunday before Lent begins is Transfiguration Sunday. Jesus takes three of his disciples up on a mountain and suddenly there is a blinding light and Jesus is changed right in front of their eyes. I always maintain that it wasn’t just Jesus who was changed. Because of what they saw, the disciples were changed too. They had been blind, but now they could see. They would trudge down the mountain, back into the darkness of the world where all the hurting people were waiting for them. They would carry with them a changed image of who Jesus is, a source of light not even the crucifixion could extinguish. I think they had a sense of possibility they did not have before.

Jesus comes along and he cracks us up. He points out Nicodemus’ flawed sense of security. He points out the Samaritan woman’s need for fulfillment. He showed the disciples how limited their view was. He reveals to us our sightlessness. We all have cracks, Jesus seems to say. We are all broken. That is how the light gets in!