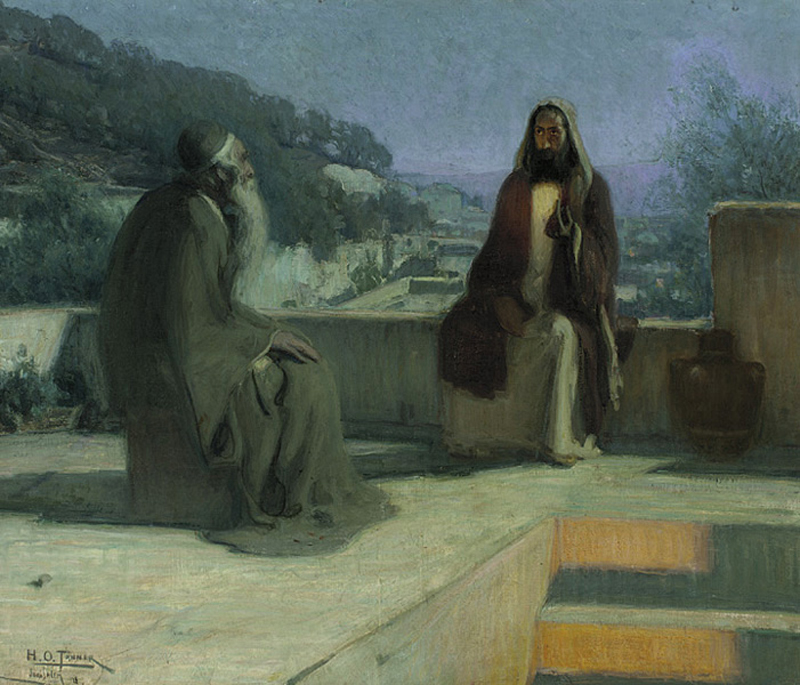 In the end, they let us have his body. Joseph and I barely could carry Jesus’ body but we managed to get it to an empty tomb. We laid it down in the dark cold of the place. I had the mixture of myrrh and aloes that I had purchased to embalm his body. We wrapped him in linen cloths. Ironically, it was the Day of Preparation. Were we prepared, I wondered? Was Jesus prepared…in death?

Now, as I think about it, it was the least I, Nicodemus, could do for this man who had so radically changed my life. At least I could take care of his broken and lifeless body. I could deliver him, in death, to his God.

I met Jesus early on…at the beginning of this whole mess. I had heard about the incident at the wedding where they said he changed water into wine. And I was actually there in the temple that day when he forced the money changers out, claiming that if the temple were destroyed, it would be raised in three days. Many good Jews were starting to believe him. I decided to find out for myself.

I should tell you: I am a Pharisee, a leader of my people. I have benefited from the best education and I like to think of myself as learned and a good teacher. You could say I have credentials. I have the paper to prove I should have respect. So, I suppose, my curiosity comes from wanting to know. Every scholar, I believe, should be curious. So, when the stories about Jesus went viral, I wanted to find out for myself. However, not everyone thought Jesus was believable and some of my colleagues were outright negative about him. I decided I would try to see him and I went to find him one night. I went after dark for a couple of reasons. I had been reading Torah at night, which is my custom and the idea came to me to go and find this guy. If I am totally honest, I would also say that I was somewhat concerned about being seen given the sentiments of some of my fellow priests.

I found Jesus alone. After greeting him, I asked if I could ask him some questions.

Jesus’ response remains with me to this day. He said “I tell you, no one can see the kingdom of God unless they are born from above.” I took this to mean that he admitted he was doing what he was doing with the authority of God…but I was confused about what he meant about being born. And, because I was trained to question and debate – it’s the Jewish way with scholars – I challenged him. How can I be born again – I am an old man. Is it possible to re-enter my mother’s womb? What do you mean by being born again?

Jesus said, “I am telling you that no one can enter the kingdom of God unless they are born of water and Spirit. What is born of flesh is flesh. What I am talking about is being born of the Spirit. What is born of the Spirit is spirit. Don’t look so surprised when I tell you that you have to be born again. God’s spirit is like the wind. It blows however it blows and all your learning cannot figure out how that happens. It just happens. You don’t know where the wind comes from or where it goes. You can’t figure it out. That is what it is like to be born of the spirit. And, let me tell you this, he said, all the credentials in the world don’t matter when it comes to being born from above!

First of all, I need to tell you, I don’t like wind. It is unpredictable and somewhat scary. I don’t like that I cannot control the wind. I am, I confess, a very rational person – most scholars are. So, when Jesus started talking about being born by the wind, by the spirit, I felt decidedly uneasy. How can this be, I wanted to know.

Jesus got this sort of amused look on his face and asked how I could be a teacher of Israel and not know these things. He said that he’s been talking about physical things and still we don’t believe him. How, then, are we going to believe him when he talks about spiritual things?

Then he mentioned Moses and how he raised that snake up on a pole and told the people to look at the thing and live. That’s what it will be like with the Son of Man, he said. Whoever believes in him will have eternal life. Of course, I knew the story of Moses but I wasn’t sure what he was talking about. Was he saying that, like the snake on the pole, he would be raised high and that whoever believed in him would have eternal life?

There I was standing in the light of his room, having come out of the night. The significance was not lost on me. But I had to think about this – it was a lot to take in. When he talked about God loving all the world – did he mean the evil Romans? So, I went home…because I had to think.

In the days that followed, I listened for word about what Jesus was doing. I heard about his visit to Samaria and I thought to myself “this cannot be good – to mix with those people”. I heard about his healing the son of a Gentile ruler and, once again, I thought he is going to be in trouble. I heard how he was back in town and had healed a lame man on the Sabbath yet again inviting the anger of my colleagues. But I didn’t go to see him and I have to admit to feeling some relief when he left town and returned to Galilee. You are safer there, I thought. And, yet, I still heard about how he had fed five thousand people one day and how he walked on water and how crowds showed up wherever he went to hear him teach. All the while, he was making my fellow rulers more and more angry. I could tell they were eager to do something to stop Jesus but he stayed in Galilee and I was relieved that he didn’t show up in Jerusalem.

However, during the Festival of the Booths, he returned to Jerusalem. Not only that, but he went right into the temple and started teaching, claiming that God was telling him what to say and a lot of the people got anxious. He kept talking about water and how if you were thirsty you should come to him. Some people in the temple believed him. They started claiming that Jesus was the Messiah.

On the last day of the festival, I decided to go to the temple because I heard that my colleagues had ordered the temple police to arrest Jesus. Sure enough, the police were there and, after listening to Jesus, they came back to us. My colleagues demanded to know why they hadn’t arrested Jesus. The police said: You gotta listen to this guy! We’ve never hear anyone who can preach like him! The crowd, my friends said, what do they know! They don’t know the law! Don’t tell us you are falling for this baloney too!

I don’t know why, maybe it was that wind blowing, but I could not remain silent. I spoke up: As you’ve mentioned our law, I said, doesn’t our law saw that we do not judge someone without hearing what they have to say? Clearly it was not the law, they were worried about. They simply accused me of being a Galilean, that God forsaken place out of which nothing good can come, certainly not a prophet. The guy is a fraud, they said. However, that was the end of it. Everyone went home.

In the days that followed, Jesus didn’t slow down. He healed a blind man, he stood up for an adulterous woman, he engaged his detractors in debates, he kept describing himself as the light of the world, or the good shepherd, or the bread of life or the door. Finally, he brought ole Lazarus back to life announcing that he was the resurrection and the life! Still, I did not go to see him. I did not follow him.

Finally, they killed him and, like the snake on the pole, they lifted him up on the cross. I was there. This time, I was there. I can’t say that I totally get the whole spirit thing, the being re-born thing. I do know this: I am not the same man I was. Somehow I found my voice that day in the temple. And I do know this, you don’t give a man a royal burial unless you think he deserved it. I may not be counted among his disciples, but I could lavish his dead body with the best oil I could find!

A few days later, the rumors started flying. Jesus had been seen. Mary Magdalene found the tomb open. When Peter and others got to the tomb they found it empty. The only evidence that Jesus had been there were those expensive linen grave clothes. Mary claims that Jesus spoke to her while she was still in the garden. Then there is the story about how the disciples locked themselves in a room, so afraid were they of what people would do to Jesus’ followers. They say Jesus showed up there too. There are other stories but the one that perhaps matters most to me is the story about Thomas. I relate to Thomas. Thomas had questions about Jesus. He was skeptical, you might say. And, then one day, Jesus appeared in a room and Thomas was there. Jesus said, “Peace be with you” and then he asked Thomas to touch the holes in his hands. Thomas did touch and seemingly all his doubts went away. My Lord and my God, he shouted. Jesus didn’t scold Thomas. He only asked him if he believed just because he had seen him in the flesh. Blessed are those who believe and haven’t seen him…in the flesh, Jesus said.

It is about coming in from the dark.

It is about….letting God give birth to you.