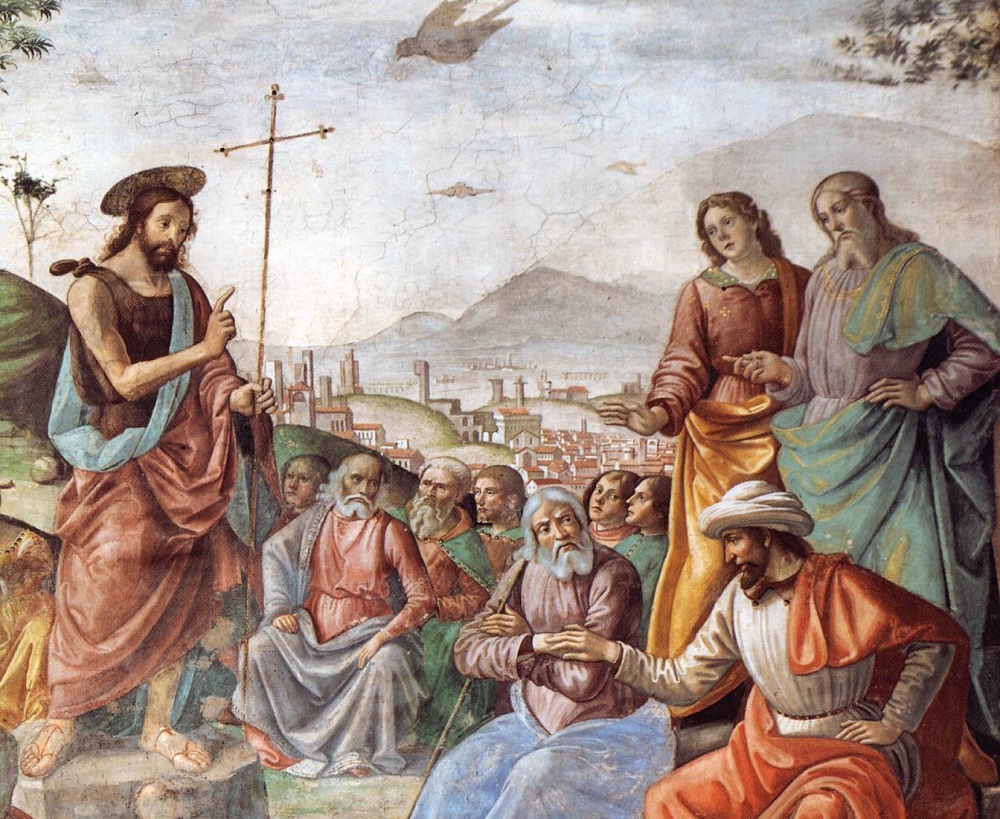 Mark’s gospel starts abruptly, which is fitting because almost everything else in the gospel happens that way, too.  Mark’s Jesus moves with fierce urgency, jumping from one thing to the next immediately, with little description and no delay.  The whole gospel resounds with a call to wake up, pay attention, so we don’t miss it.  Mark moves so quickly, in fact, that he skips over sweet baby Jesus completely and starts with John, a sweaty toothed madman out in the desert, baptizing people and hollering about the one who is coming – a man not just holier than thou, holier than all of us.  And we’d better get ready, John says.  Get right with God so we can be ready to meet him.

John is painted as an incarnation of the prophet Elijah, with a hairshirt on his back and honey dripping from his chin.  John looks back to the prophets of old and then looks ahead, points to the horizon and says soon.  Repent for the day of the Lord is coming soon.  Listen for a word from God:

One of the strengths of the Roman empire – one factor that led to its dominance across Europe, and North Africa, and the Mediterranean – were its roads.  The first paved road in history was the Appian Way!  Roman highway infrastructure facilitated the movement of its military, as well as goods and people across long distances. Roads enabled the empire to grow, and in whatever new land Rome conquered, new roads were built.  You’ve heard the saying, all roads lead to Rome – right?

Countless books, from Cormac McCarthy’s The Road to NK Jemison’s Broken Earth Trilogy, portray roads as necessary but dangerous places.  The easiest way to get from point A to point B, but a way that exposes travellers to potential threats.  Roads can be risky.

Building a road in the ancient world was not an easy feat.  And anyone who’s worked construction could probably tell you – building a road today is no walk in the park either.  You have to work with topography, clear the way, haul out rocks, haul in gravel, mix cement, pour asphalt, tamp it down.  Even though many Roman roads were still in heavy use even into the middle ages, they’re difficult to maintain without the appropriate equipment and resources.

Travel around Guatemala is facilitated by an excellent highway system, built and maintained by a government that needed to move its military into rural and remote mountain villages to terrorize the countryside during thirty years of civil war.  Maintenance crews, though, are often equipped with nothing more than shovels, dirt, and gravel to fill in potholes.  Driving on some roads can be a jarring, jolting, bone-rattling experience.  But they get you where you need to go.

The most rural village I’ve ever visited didn’t have a road leading to it.  They built one, so the group I was with could get there.  A narrow track winding for miles through a palm oil plantation, then the thick jungle of a biological reserve where the settlement was.  Men with machetes and shovels hacked at the earth and cut back dense vegetation for weeks to prepare the way for our arrival.  And even as we drove, a few walked ahead in tall black rubber boots, cutting vines and moving branches that had grown over or fallen on the path. Building a road, making a way is back breaking work.  It leaves you with blisters and body aches, calloused hands and grit under your nails.

Mark begins by calling people to prepare the way, because God is coming.  Quoting Isaiah, Mark shows us John as the voice calling out in the wilderness: prepare the way of the Lord! The valleys will be lifted up, the mountains made low, and rough places made a plain.

That kind of road building, way-making seems impossible, but those words in Isaiah begin what’s called the book of consolation – words of comfort for people who have suffered too much for too long.  And even though Mark’s beginning is a bit jarring, John’s wild-eyed preaching offers us grace: the healing waters of baptism to help with our preparation.

Before a surgeon goes into surgery, she scrubs in, washing hands and nails and wrists in an intense ritual.  Nurses and doctors wash their hands with each new patient, and our Muslim brothers and sisters wash their feet and hands at least five times a day, before prayer, to become ritually clean.  Handwashing has taken on new meaning for us this year in the midst of a pandemic, as just twenty seconds scrubbing with soap and water will obliterate the virus.  I know I’m not the only one now hyper aware of germs on the things that I touch, mentally measuring the distance between myself and others, wondering about aerosols and the efficacy of fabric filtration.  Thank God for water, as a means to stay healthy.

It’s easy to see how the sacrament of baptism came to be – ritual washing to signify a new beginning, new life.  Cool, refreshing splashes of water carrying the blessing of the Spirit.  Not until I had children, though, did I fully appreciate how grubby people could get!  Washing off grime, wiping your face, washing hands is absolutely necessary in order to look presentable before welcoming an honored guest.

So it makes sense, then, that to help people prepare for the coming of the Lord, John baptizes them – a ritual washing to symbolize their repentance.  That is, the inner work of turning away from that which does harm, shown outwardly with water, washing away whatever marked us as unfit or unworthy, unclean or unprepared.  Transforming us into new people, ready to welcome the one who is coming.

This preparation is the work of Advent.  With John, we are called to look back to the calls and the promises of the prophets, and look ahead to the time of fulfillment.  We’re called to do the work both within and outside of ourselves to get ready.  Because even though it feels like the world is falling to pieces around us, God is coming.  And that is good news!

My girls have a box of books that only comes out at Christmastime.  One of my favorites is a little board book called, who is coming to our house?  Animals in a barn are getting ready for someone to arrive, dusting beams and opening the door.  Each animal does what they can – the spider spins new webs, the hen lays an egg, the duck lines the manger with eider.  But the reason why I like the book is the cat, who says – but it is dark.  And the rat, who says, they will never come.  Because more often than I’d like to admit, in the midst of this terrible year, despite the joy of this season, I find myself with the cat and the rat: beset by doubt, overwhelmed by worry, sad about the state of the world.  I can hear John crying out in the wilderness, but I want to shut out his voice.  I’m not sure if it will make much difference to prepare this year.  Because the night is so long.  Our social fabric is torn apart at the seams, our hearts are broken.  We are depressed at the prospect of another holiday without our families, another service on Zoom.  How many more will be put out onto the street?  How many more will die?  Some days, the grief feels like too much to bear.  How dare we say Christ is coming, how dare we say his coming changed anything at all.

In the midst of this, it helps me to remember that Mark was writing to people who were under siege, who were surviving the greatest trauma they’d ever known: violent uprising against their Roman oppressors, when food was scarce, the temple soon to be destroyed, the people scattered to the four winds.  Into that turmoil and trauma, into that doubt and fear and worry and suffering and sadness, Mark says, John says, Isaiah says – take comfort, people.

To every troubled heart and weary soul.

Peace is coming, to every ICU where exhausted nurses tend to the dying, where people struggle to breathe without their loved ones by their side.

To every home where someone is choosing between groceries and rent.

To every place where violence and terror reign – everywhere people are afraid of what the coming day will bring.

Peace to those who wait in the dark.

Peace to all who long for freedom.

Peace to every home and every heart.

Peace which surpasses all our understanding.

Peace is coming with calloused hands and grit under their nails, with a machete and a shovel and tall black rubber boots, building a road through the thickest jungle, making a way where we thought there was no way.

Wash our hands, reclaim our baptisms, cleanse our hearts, be renewed and restored by grace.  Because Christ is coming, to make all things new.  And that is very good news, indeed.