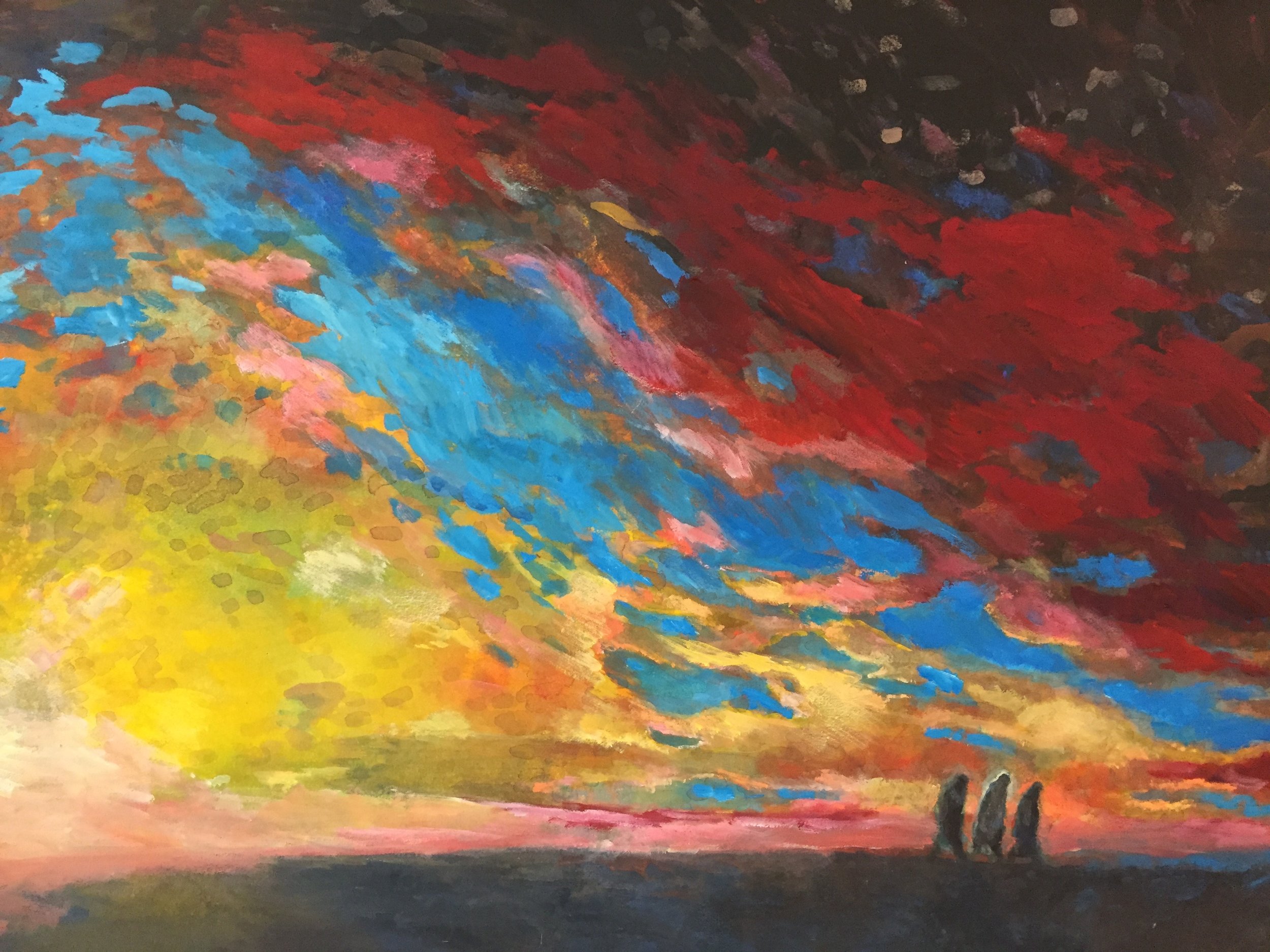 In 1944, a cartographer named Harold Fiske set out to map the Mississippi River.  Now, the Mississippi is the longest river in the continental US, 2,300 miles long and a mile wide in some places.  So this was no small task.  But Fiske made his work imminently harder, because he made what’s called a meander map – drawing not just the current route of the river, but also the various paths the river has taken over many thousands of years. Instead of showing the river as a single line, Fiske’s map shows a tangle of red, blue, and green squiggles, connoting the path of the river over time.  See, we think of rivers as having a set course, always flowing in a single direction, and predictably stable, when in fact – over time, rivers change course!  They are living, moving creatures that flood, overflow their banks, shift from one place to another, moving their silty selves over miles and years, seeking the most direct route out to sea.

Since the very beginning of a colonial presence in this country, French and then American engineers have sought to restrict the river to a particular course, building levees and locks to prevent flooding and keep the water flowing within set boundaries.  But nature, of course, has other ideas.  As you can see, the maps are beautiful… as one graphic designer put it, “[they] represent the memory of a mighty river, with thousands of years of course changes compressed into a single image by a clever mapmaker with an artistic eye.”[1]

When Jesus tells this story of the lost objects, he’s talking to Pharisees who have criticized his choice of dinner companions.  “He welcomes sinners and eats with them,” they say, grumbling.  In response, Jesus talks about a shepherd who leaves behind his flock of 99 to search for the one who has wandered off.  The woman with 10 silver coins, who sweeps the house until she finds the one that has been dropped into a dusty corner.  These are beloved parables, because who doesn’t know the frantic feeling of having lost something?  Who hasn’t turned the house upside down to find glasses, keys, or cell phone?  We once were delayed leaving my parents’ house after a holiday because I couldn’t for the life of me find my car keys.  After searching through every pocket and drawer, I discovered them half an hour later on a side table, hidden beneath a magazine.  Dary, bless him, has helped me developed strategies to keep track of my essential items – always put keys by the front door, keep wallet and phone in consistent pockets, check for all three before you leave the house.  He’ll be the first to admit that his strategies aren’t foolproof, but they help.

We can relate to these parables, because all of us know the heart pounding befuddlement of being lost – taking a wrong turn, retracing steps, trying to find our way back to the right path, back to what is known and familiar.  And while GoogleMaps and Waze have made it easier to find our way to new places, there have been times over the past few years when I’ve felt more lost than ever.  The before times, pre-2020, feel lost to me, never to be recovered again.  We can’t find our way back there, not as a culture, not as a country, not as a church – no matter how hard we try.  The pandemic feels like lost time, years in which many of us lost relationships, and lost our bearings. Some even lost our sense of obligation to one another.  In a way, it’s been a summer of loss: understaffed and overstretched airlines lost more lost luggage than ever before.  Women in almost half our fifty states lost the right to choose.

Thinking about loss on this day, September the 11th, reminds me of the horrible loss of life brought by terror and war.  Remembering 9/11 also evokes a loss of innocence – a clear demarcation of before and after, irrevocable changes in national identity, foreign policy, transportation security, world order that have come to pass in the decades since.

Yes, we know the feeling of being lost, of losing something or someone precious to us. So often life does not go as planned, things do not turn out as we hope they will.  We make mistakes, we lose our way. And so I notice a few things about this story that I want to point out.  The shepherd and the woman both search tirelessly, relentlessly, until the lost items have been found.  And when the sheep and the coin found, they rejoice.  The shepherd does not give up; the woman does not get distracted, or say, “oh, it’s just one coin, just let it go.”  No.  They search until that which was lost is found again.

It’s as if Christ is saying to his critics, you’ve written off these people as lost, these tax collectors and sinners, but every life has value to God!  These people are worth seeking, worth knowing, worth celebrating with!  These sheep outside the fold, I came for them as much as for anyone!

Also, the coin and the sheep don’t do anything to be found.  They don’t apologize, they don’t admit guilt or confess faith – they are simply sought after and found, and when they’re found, there is celebration.  These two parables are followed by a third, the story of the lost son, the prodigal.  There is a line that stays with me from that story – after he has left home and squandered his inheritance with loose women and dissolute living, when the prodigal son is so hungry he considers eating the slop he’s supposed to throw to the pigs – he comes to himself, and decides to go home.

He comes to himself.  Remembering who he is and to whom he belongs.  And returns home, and is welcomed with joy and celebration.

The author Elizabeth Guilbert says looking at a meander map is like seeing a map of the journeys of her heart.  She writes, remembering, “All the rules and boundaries that I have set for myself over the years, and how often they have failed. I think about the vows I’ve made to myself and others about where I’m going to be next year, or who I am going to be next year. Endless, expensive, stress-inducing efforts to civilize the river of my being.”

She goes on, “I often say that, after a certain age, every woman in the world could write a memoir called: NOT WHAT I PLANNED. We change. Life changes. We often feel shame, confusion and anger about about those shifts and pivots. But what if we just trusted the river? She seems to know where she wants to go…”

If you were to draw a meander map of your life, what would it looks like?  I imagine few of us would be able to draw a straight line from point A to point B, leading up to today.  Likely we all would have a tangle of lines, times when we backtracked and got turned around, and didn’t know which way to go.  Maybe some of those paths cause us confusion or even shame.  But those are the paths that have made us who we are, that lead us back to ourselves!  Think of all we’ve seen and learned along the way!  Think of all we are still becoming.

If we were to draw a meander map of our congregation, the different paths we’ve taken, all the turns and detours and adventures that have led us to this place, what would it look like?  There is much that we’ve lost along the way, it’s true.  We’re smaller than we used to be, in a building that is more than we need.  But I wonder if such a map would help us to trace and celebrate the paths that led to our beautiful diversity, and gave birth to our fierce commitment to justice. I know the map would reveal the ways and times we’ve shown up for each other, and show the many times we’ve answered the call to love and serve our neighbors; wouldn’t this map lead to our vision of an urban forest, and a property in service to our community in new and needed ways?

In our opening hymn this morning, we sang the words, come and remember who you are here.  Come and remember who God is.  Come, and remember you belong here.  All belong here.  To re-member is to put ourselves back together after being scattered, broken, scared and lost.  So today, I hope as we gather at the table we will take a minute to remember.  To look back at the many paths we’ve taken, the times we’ve felt lost, the times we’ve found our way.  And to help us remember this day as one in our journey, when you have a moment in the service – either as we sing a hymn, or when you come forward for communion – or before you leave the sanctuary – come, write your name on the tablecloth.  Because there is a place for you here.  Thanks be to God!