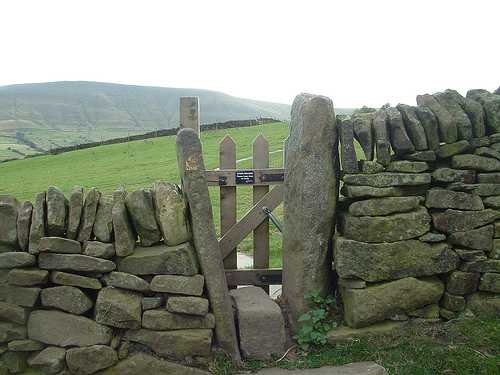 The Blessing of the Gate

The Blessing of the Gate
Rev. Christa Fuller Burns

“I am the gate. Whoever enters by me will be saved, and will come in and go out and find pasture.” (John 10:9)

During Lent this year we will be considering who Jesus says he is. As we move toward Jerusalem and his death, we will hear many competing arguments about the identity of Jesus. Is he a prophet? Is he the messiah? Is he a political threat? Is he a sinner, a blasphemer, a fake? Jesus has just given sight to a man born blind and he appears to be still talking to the Pharisees who have some questions as to this man’s identity. I am, Jesus says, the gate.

I saw an interview with the snow boarder, Shaun White, after his spectacular victory at the Olympics in which he tried to answer questions about his alleged harassment of a woman. In a clumsy response, White said, “I am who I am”, a statement that didn’t sit well with a lot of people. How we finish the sentence “I am…” is very important isn’t it? It was important for Jesus and it is important for us. Indeed, when God announces to Moses, “I am who I am”, God lays down the gauntlet for those of us who try to live fully into our calling as God’s children. Who do we say that we are?

In his “I am” statements, Jesus uses metaphors to attempt to tell us who he is. I am the gate, Jesus says. Specifically, Jesus says that he is the gate for the sheep. I can never hear about sheep pens without remembering our family’s drive east just after I had graduated from High School. Our father had been transferred to Missouri which, as Californians, we thought was just about the end of the world! We set out in our old station wagon. Our Dad wasn’t one for making reservations, or researching where we would spend the night. We just drove until we were tired and then we stopped. In this case, on our first day, we drove through the desert and we were someplace in Arizona or maybe New Mexico when we started looking for a place to spend the night. There was nothing – that is my memory of it – nothing as far as you could see – no towns, no gas stations, no nothing. Finally, we came across a run down motel and we pulled in. It wasn’t exactly up to our mother’s standards, but we had beds. I wanted desperately to watch the Democratic convention in Chicago, but there wasn’t a TV. This whole trip did not bode well, I thought. Then, after we had settled into our beds, we heard it. The motel was actually a sheep pen in the middle of a Navajo reservation. We were surrounded by bleating sheep that had been brought into the safety of the sheep pen for the night!

I suspect sheep herding has not changed all that much since Jesus’ time. Then, as now, it was important to provide protection for sheep, to gather them together in a secure place for the night…a place with a gate.

We know that gates serve two functions. Gates both allow entry and gates keep out. Gates are meant to keep out the bandits, the wolves – anything that might harm the sheep. Unfortunately, we Christians, we People of the Gate have proved very adept at using gates to keep out. My husband grew up a Southern Baptist, but when he went to college and saw the Deacons, the gate keepers, of the First Baptist Church standing on the front porch of the church to prevent Black people from entering, he left his church.

I suspect most of us have experienced closed gates at some point in our lives – a sign that says you can’t drink from that fountain, or worship at that church or eat at that counter, you can’t be ordained because of your sexual orientation, your application was turned down, your relationship ended, you had an illness that crippled you, or you were rejected one way or another. We all know what closed gates look like.

However, I think Jesus’ primary intent in describing himself at the gate is to emphasize the positive purpose gates serve as vehicles for entrance. Jesus declares that his purpose is to provide life, abundant life. He says, I came that you may have life and have it abundantly.

The image of that life is the pasture on the other side of the gate…the pasture that is green and where there is water, and peace and safety. Most of us have pleasant associations with the image of pastures. We can picture those idyllic places where we see God’s creation and are restored. Perhaps it is easy then to reduce pastures to sentimental pictures on Hallmark cards.

At a time when we confront yet another horrific school shooting in which 17 people were killed, I wonder it the image of a pasture is more nuanced that a romantic vista. In fact, I wonder if a green pasture has implications for our society.

No, this morning, I think we have to face the reality that if you are a child in school, if you are an immigrant, if you are a woman, if you are a young Black man you are not safe in this country! Those who are supposed to be the gatekeepers, the protectors – politicians, law enforcement officers, employers – are very often the ones who fail to keep us safe!

Consequently, I suggest that when Jesus says that he is the gate, he is not inviting us into a picture on a Hallmark card, much as we desire that kind of idyllic setting. I suggest Jesus is inviting us into a place where we are safe from the real evil that lurks outside the walls. This man who lived in a very dangerous time in a dangerous place and who was increasingly unsafe himself, this man says to Jerusalem, that city where he will definitely not be safe, “O that you knew the things that make for peace.” When a woman accused of adultery is brought before him by people who want to stone her, Jesus rescues her. When the disciples are out on a boat and it gets dark and a storm starts to blow, Jesus comes walking on water to bring safety.

In my mind, Jesus’ pasture summons the words of the psalmist:

For he will command his angels
concerning you
to guard you in all your ways.
On their hands they will bear you up,
so that you will not dash your foot against a stone. Ps.91:11-12

On the front page of the paper the day after the shootings in Florida was the picture of an anguished mother with a cross of ashes on her forehead. When I saw it I thought about what we had done together on Ash Wednesday. We sat in the quiet peace of the chapel with flute and guitar and piano music and we marked each other with the sign of the cross. We said to each other, “Remember that you are dust and to dust you shall return.”

Being a Christian is hard. Even though, God intends safety for us, we aren’t spared pain, or hardship or suffering. The woman whose forehead was smeared with ashes knows that. We know that Our calling is to follow Christ despite the knowledge that there are thieves and bandits and those who want to harm the sheep – us.