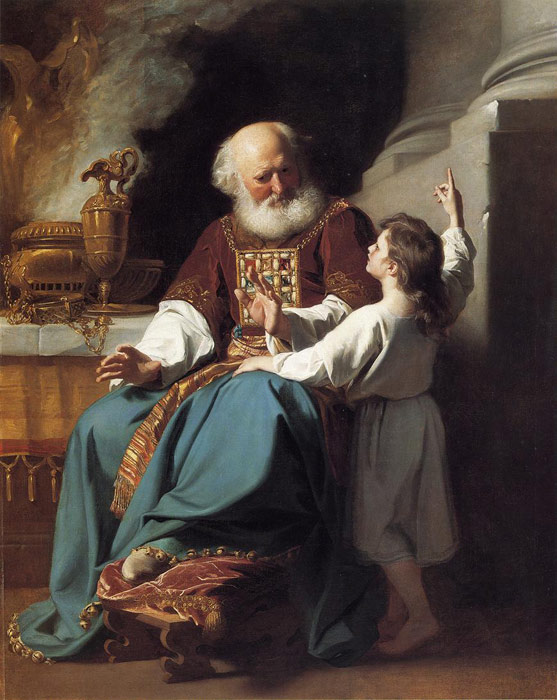 Things that Go Bump in the Night

Things that Go Bump in the Night

Even though most of us grew up hearing the story of Samuel in Sunday School or in children’s books, it seems to me some introduction is appropriate.

The children of God survived the wilderness experience, though not without messing up more than once. There was, as you recall, the matter of the golden calf – one of many failures. After numerous battles and mishaps, they finally make it to the Promised Land. All the while, the children of God are learning what it means to be a people – a nation of people. They are loosely arranged into 12 tribes and they are governed by judges. The story of Samuel begins with his rather miraculous birth to the previously barren Hannah. Hannah promised God that if she can have a son, she would dedicate him to the priesthood. There is a curious little detail in this part of the story. Hannah and her husband go to Shiloh, as is their custom, to worship. Hannah is praying to God and asking for a child. She does so by only moving her lips. The Bible says, “her voice was not heard” (1:13). The priest, Eli, sees this and thinks she is drunk! Hannah comes back at him, saying “Do not regard your servant as a worthless woman, for I have been speaking out of my great anxiety and vexation all this time”. (1:16) I point this little detail out because in many ways our story is one about hearing and listening.

Hannah gives birth to a boy and she names him Samuel because, as she says, “I have asked him of the Lord”, the inference being that God heard her even though she was only moving her lips.

As promised, the boy Samuel is taken to study at the House of the Lord in Shiloh with the elderly priest, Eli.

Here’s the thing: Eli had sons of his own. His priesthood and authority should have passed to them. However, Eli’s sons were a mess. They cheated the people, took advantage of their prominent position, and they slept with the women who served people at the door of the tent of meeting. Eli knew about his sons. He knew they were scoundrels. Eli had a father-son talk with his sons but they didn’t listen.

God sends a man to tell Eli what a disappointment he has been. God has been counting on Eli. Eli’s family was trusted by God to lead the people in the way they should go, but his sons have been a disgrace. God’s trust in Eli and his family is broken and God is going to go in a different direction.

And, so we come to today’s story. The boy, Samuel, is serving God in the house of Eli. In those days, the word of God was rare. Visions were not widespread. Is it comforting to know that ours is not the only time when we feel like the word of God is rare and that visions are not widespread? Do we read the paper or listen to the news and yearn to hear God speaking through the people who seem to have so much to say these days?

Of course, in the very next sentence we learn that Eli’s sight is getting worse and he can’t see. It might hard to have visions if you can’t see….or maybe not! Eli has turned in for the night. The lamp of God has not yet gone out. Well, that is hopeful. Is there hope for us if there is even a little flicker of God light? So what if there is no Pentecostal fire burning up the place (I use this image with caution as we are mindful of those blazing fires in the west). There is just the faintest flicker of God light. That is the point. And the man is blind. And he is sleeping. Samuel is also sleeping in his room.

God calls Samuel. Samuel jumps up. Here I am. He runs to Eli who says go back to sleep I didn’t call you. So Samuel goes back and lies down in his bed. God calls again. And again Samuel says “Here I am”, runs into Eli’s room only to be told to go back to bed.

We are told at this point that Samuel did not know God yet. Samuel did not know how to identify God’s voice. Samuel couldn’t tell when God was talking to him. The inference is that if we really know God, we’ll know when God is talking to us. That is kind of scary, isn’t it? I mean Moses had a burning bush. That is kind of a heads up. Jacob had a ladder full of angels. That is kind of a big tip off. All Samuel has is a voice in the night. Poor kid! Would you know it was God? Do we know it is God…or is it simply something that goes bump in the night, branches brushing against your window, the sound of the floor creaking or furniture settling?

After all, Samuel is just a boy. Why would God be talking to a kid, especially when you’ve got the supposedly wise anointed Eli?

The next time Samuel hears the voice and goes to tell Eli, Eli gets it. He figures out it must be God talking so he tells Samuel to go back to bed and if he hears the voice again he should say, speak for your servant is listening. Sure enough God comes and stands there calling Samuel’s name. Samuel replies: “Speak, for your servant is listening.” Then God tells Samuel that God is about to something in Israel that will make everyone’s ears tingle. God proceeds to tell the boy what will happen to Eli and his sons because of their behavior.

Samuel is understandably afraid to tell Eli what he heard. But Eli knows. He calls Samuel. He addresses him – Samuel, my son. The son I should have had. The son who will lead the people. The son who will take Israel into the future. Samuel, Eli says, tell me everything. Eli recognizes God’s words.

In verse 19, we read, “As Samuel grew up, the Lord was with him and let none of his words fall to the ground.”

The story of Samuel seems to suggest some answers.

“From goulies and ghosties
and long legged beasties
and things that go bump in the night –
Good Lord deliver us!

I don’t know – maybe listening for God means listening to the things that go bump in the night.

Let us pray: (This is a prayer by Walter Brueggemann)

We are surrounded by a din of demanding voices:

We screen them out in order to maintain our sanity,

to secure our rest.

And then, in the night, you address us,

you call us by name,

you entrust to us risky words,

you empower us with authority.

But your voice is on first hearing not distinctive.

We confuse your voice with that of an old friend

or a deep hope

or a powerful fear

or an ancient bias.

We hear, but we do not listen –

But your voice sneaks up on us:

you call us by name,

you entrust us with risky words,

you empower us with authority.

“Speak, I am listening.”

And listening, we are made new and sent dangerously