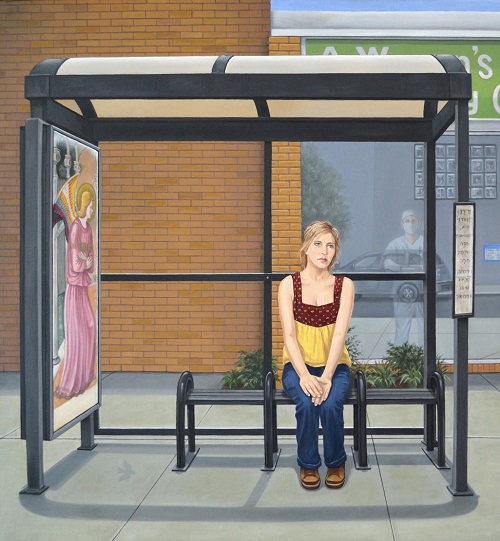 Waiting for God in All the Wrong Places – Fiery Furnaces

One of the most famous Advent texts is that passage from Isaiah, “the people who walked in darkness have seen a great light.” Isaiah was addressing honestly the fact that we all walk in darkness at various times of our lives. At least one of the gifts of Advent, then, is to admit that we have known darkness, and, indeed, we must know darkness in order to see a great light.

Admittedly, the texts for these first two Sundays of Advent may seem to be odd choices: the three young men in the fiery furnace in Daniel and Ezekiel prophesying to the dry bones in Ezekiel. Why aren’t we getting those passages about how the desert will bloom and how Mary meets the angel and how John the Baptist appears in the wilderness? However, I would point out that John the Baptist was all about exposing the dark places in his world.

When I started to think about these two texts, I realized they were passages about waiting for God in all the wrong places. That is what Advent is, isn’t it? Waiting for God. And, the fact is, a lot of the time we aren’t waiting for God in churches or on mountain tops or in places where we are embraced by beauty and love. A lot of the time, we wait for God…in seemingly wrong places…in a cold stable, in exile in a foreign land, in a barren desert or, like the young woman on the cover of your bulletin, unwed and pregnant and sitting at a bus stop.

Our story this morning begins as the Israelites are refugees in King Nebuchadnezzar’s Babylon. As refugees, the Israelites are not allowed to circumcise their sons or even to own a Torah. The king has selected four of the Israelite young men as being especially handsome, smart and capable to be tutored in his palace. When the young men arrive for duty their names are changed. Their original Hebrew names all referenced their God in some way. So, Daniel (Daniel by the way means God is my judge) becomes Belteshazzar, Hananiah becomes Shadrach, Mishael becomes Meshach and Azariah becomes Abednego.

Nebuchadnezzar is a bad dude. He is power hungry, he is erratic and unpredictable, he is insistent on promoting his inflated sense of self. Nebuchadnezzar has the idea that he can promote unity and obedience if he erects a large gold statue and get all the people to worship it. Whenever the people hear the horn and pipe and lyre and trigon, harp and drum, they are to come running and bow down before the idol. This is not the first time music has been used for ill, is it?

Our friends, Meshach, Shadrach and Abednego have already resisted the king’s attempts to relinquish their God and, sure enough, they refuse to hop to when all the king’s back office boys call them to bow to an idol. We recognize these back office boys, do we not? Doesn’t every regime have them…the people who are only so happy to do everything the tyrant asks, to hop to at his every command, to earn favor however they will? The back office boys tell on our three young men:

You issued an order, didn’t you O King, live forever? Didn’t you say that whenever we hear the horn, pipe, lyre, trigon, harp, drum and whole concert band, we are supposed to fall on our faces and worship the golden statue. Didn’t you say that whoever refuses to obey will be thrown into a fiery furnace? Well, we know these guys refuse to do what you ordered and their names are….Shadrach, Meshach and Abednego. They do not serve your gods. They do not obey your orders.

Nebuchadnezzar flies into a rage. He orders the three young men to be brought before him. Is it true, he wants to know? Are you not serving my gods? Are you not bowing to my statue?

The three young men’s answer is very important: If our God – the one who we serve – is able to rescue us from the furnace of flaming fire and from your power, Your Majesty, then let him rescue us. But if he doesn’t, know this for certain, Your Majesty: we will never serve your gods or worship the gold statue you’ve set up.”

Martin Luther King preached a very powerful sermon on this text entitled “But if Not” in 1967 in which he urges us to do what is right even though God may not deliver us from the consequences of doing right. In this sermon, King depicts Shadrach, Meshach and Abednigo as being examples of the civil disobedience King was defending.

The king orders some of “the strongest men in his army” to bind the men up, dressed in all their clothes, and throw them in the furnace. When the king looks into the furnace, he discovers his henchmen have been burned up but the three young men are unscathed. In addition, there is another figure walking around with them like an angel. None of them are burned at all. Their hair isn’t singed and their clothes don’t even smell like smoke!

Nebuchadnezzar is so astounded that he changes his decree to say that if anyone disrespects the God of Shadrach, Meshach, and Abednego, they will be torn limb from limb; their house made a trash heap because there is no other God who can rescue like this!

The story of the fiery furnace stands in contrast to the story we heard last week from the prophet Jeremiah who told the exiles in Babylon to build houses and live in them, plant gardens, have families, survive. The book of Daniel isn’t just about surviving in the dark places of our lives, it is about resisting. It is about refusing to bow to idols. It is about keeping your identity and your God.

This may seem like a frivolous little children’s story to us – you know – like how we heard it in Sunday School. It is true that it is a colorful story and it is true that it contains humor – the details about the band, the boys from the back room, the silly king. The story of Shadrach, Meshach and Abednego would seem utterly silly if we didn’t know about the numerous examples of people who have stood up and defied the kings of our world and stayed true to their God. The Jews and the Christians during the Holocaust who refused to bow to Hitler, conscientious objector’s who refused to fight because of their faith, those who marched with King in the face of fire hoses and dogs,

Indeed, as we celebrate communion this morning, perhaps we should remember those early Christians who observed this meal in secret, in catacombs, because Emperor Nero made it illegal for Christians to congregate and who spread rumors that this sacred meal involved drinking human blood. Civil disobedience arguably is part of our Christian DNA.

So, I am thinking this morning about the sad detail in this story of the name change. When Shadrach, Meshach and Abednigo enter the service of the king and their names are changed. There are sad name changes: when Africans were brought here in slavery and their names changed to Anglo ones, when immigrants arrived here and change their names so they won’t be discriminated against, when Jews changed their names so they wouldn’t be identified as Jews. However, there are also positive examples of name changes. Last Sunday, Dr. Siba Grovogui, told our Adult Forum that, in Guinea where he is from, it used to be that when you moved from one tribe to another, you just changed your name, simple as that. When Abram and Sarai choose to follow God’s direction, God changes their names to Abraham and Sarah. Jacob’s name was changed to Israel. When Saul has his blinding revelation, he changes his name to Paul. Jesus changed Cephas’ name to Peter.

So, if Nebuchadnezzar could change those three guys’ names, why can’t we? Let’s just use our imaginations for a moment. Let’s imagine that one is named Mary….Mary Hamilton. Do you know who Mary Hamilton was? Mary Hamilton was a black civil rights activist who was arrested in Alabama. When she appeared before the judge, he insisted on calling her Mary. When she protested that she should be called Miss Hamilton like any white defendant, the judge ordered her in contempt of court, fined her and threw here in jail for several more days. Her lawyers appealed Mary’s case and eventually the Supreme Court ruled in her favor. Mary refused to bow to the Nebuchadnezzar of her time.

Perhaps one of the three people in the story’s name is Beverly. Beverly Young Nelson has accused Alabama Republican Senate candidate, Roy Moore, of sexual misconduct, publicly standing up for herself and others whom she believes have been the victims of unwanted sexual attention. Beverly is refusing to bow to the Nebuchadnezzar of her time.

Maybe, just maybe, one of the young people’s name is Mary. Mary found out she was pregnant out of wedlock. Mary could have run away. She could have hidden. She could have lied.  However, Mary announced:

My soul magnifies the Lord,

and my spirit rejoices in God my Savior,

for he has looked with favor on the lowliness of his servant.

Surely, from now on all

for the Mighty One has done great things for me,

and holy is his name.

His mercy is for those who fear

He has shown strength with his arm;

he has scattered the proud in the

thoughts of their hearts.

He has brought down the

and lifted up the lowly;

he has filled the hungry with

and sent the rich away empty.

He has helped his servant Israel,

according to the promise he made to our ancestors,